Hi there! Well, once again the forecast is for more hot weather - at least until mid-week. Bring it on!

Been a bit 'out of sorts' here this past week - nothing specific, just not firing on all cylinders and finding it hard to get enthusiastic about crafting - which is almost a first for me! So, my snippets card is a really basic one and this is my feeble effort: 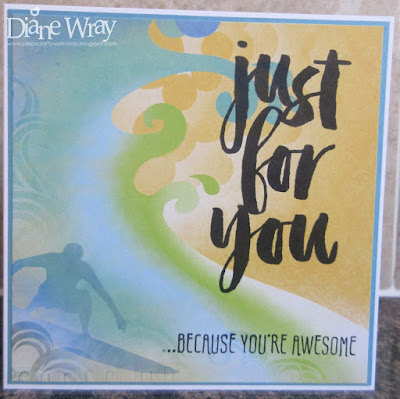 - a square of blue card from the snippets folder which I checked against my SU card swatch and it's, aptly enough, called 'Marina Mist'. Trimmed to slightly smaller than the card front and glued in place

- using the Misti I stamped a two part sentiment from SU's 'Botanicals for You' set, using a Rangers Archival 'Jet Black' ink pad

So quick and easy, as well as suitable for a chap. One thing in my defence is that I did manage to use one of those patterned sheets of paper from the pack that tend to be left until last 'cos you don't really know just what to do with them!

Now for our weekly 'peek at the picks' - and what stunners I had to choose from - as always. I could include loads more as ever - so do please go back and check out last week's Mr Linky if you have time. I've tried to show you some really clever ways to use up snippets as well as some different techniques this week. There's so much talent and inspiration there! 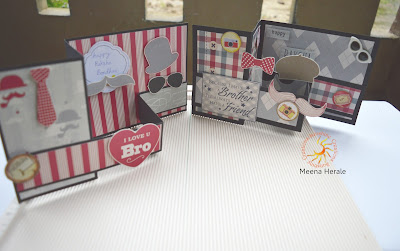 Meena brought us a couple of brilliant Z fold cards to share - such a super way to use up snippets as well. If you hop over to Meena's blog HERE she's kindly left us a really clear tutorial on how to make one of these fancy folded cards. 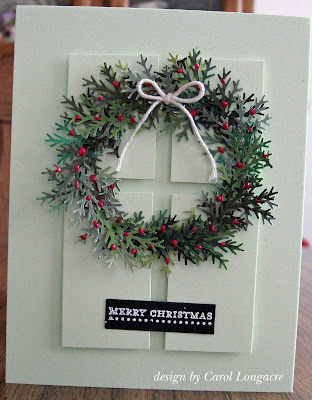 I totally love this Christmas card, made by Carol L. Just look at all the work in making that fabulous door wreath! Carol punched loads of little snippets into ferns and then adhered them onto a round ring of card stock with Glossy Accents. I'm thinking that this is a perfect task to carry out when inspiration isn't forthcoming and you have time to spare - possibly working on a lap tray in front of the TV? Mind you, perhaps best to do all the punching beforehand :)

TrinaP only recently joined us but if you haven't been visiting/following her blog then you're missing some fabulous cards. This card is just so clever I think. Love the monochrome strips across the main part of the card with the cute little piggy holding the heart - but what totally pushed the card up several notches for me was the great idea of replicating the monochrome strips within a smaller white frame, topped by the 'hugs' die cut, and added to the card at an angle. 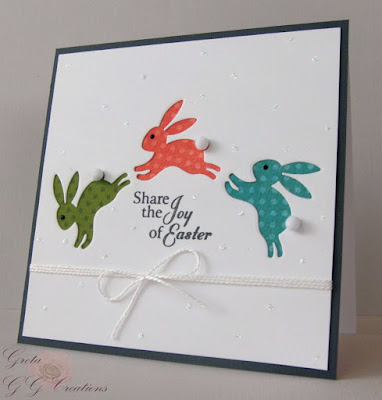 I know, it's 'Easter in August' - and what a card Greta made here! Love the leaping bunnies die cut around the sentiment and backed with different colours of spotted paper. Such a clever idea - and see those darling little bobtails as well? Squeal :) I love it! 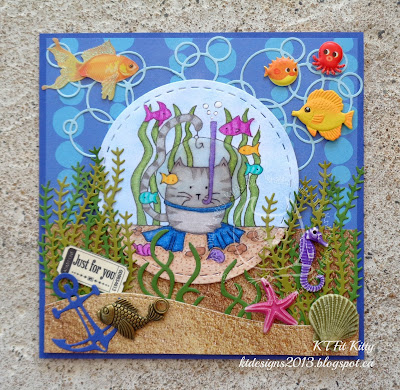 I absolutely had to include this amazingly detailed card - made by Kitty. So much to look at here, tons of snippets used to create such a fabulous underwater scene - and the main image cracks me up! Look closely at the puddy tat's tail - there's a fish hook dangling from the tip! :) Super fun card Kitty! 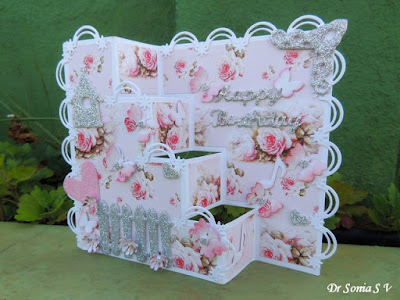 And last, but not least, how about this utterly fabulous card - made by Sonia?! It's so pretty and delicate looking. I've previously featured cards made using the same fold here by other crafters (Janice and Liz) and to be honest this is a perfect example of how we enable one another in the Playground - some might use the word 'tempt' rather than 'enable' though :) And of course I also have the set (bought when I saw them over at Liz's) - but can't show my make just yet. Watch this space as it's a Sunday Snippets card in three weeks time - and you can guess what that usually means :)

Wow, I have more picks than I'd intended so best to bash on with the rest of this post.

We had one new Playmate join us this week: 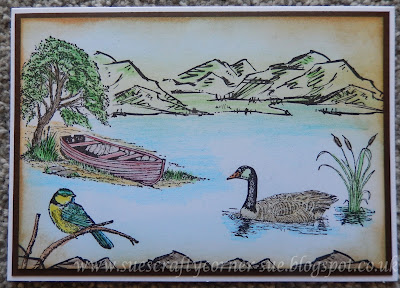 We have another Sue (Sue T) playing along - and isn't this a gorgeous scene she created on her first entry? I can never get the elements of a scene to work together anything like as well as this one by Sue - so tranquil too. Beautiful!

A big welcome Sue, from all of us. Hope you come back to play again soon. Right now the Playground is pretty much calm as folk are on their holidays or having a little break from blogging - but we do have some crazy times when things are in full swing! At least the place isn't full of empty bottles hidden in the bushes behind the bike sheds - no names mentioned!

Having said that, 54 entries during what's usually a quieter time for challenges is pretty good going I think!

Now it's prize draw time, for the Inkadinkadoo 'Humming Bird' stamp and the Inkylicious ''Learn to Fly' sentiment stamp as shown last week.

And the winner is:

ScrappyMo (Maureen)
Congratulations Mo!! This really was well due I think - just checked my little book here and I think your previous win was in July 2015! Please see the paragraph below about claiming your prize.

Sadly I've got to introduce something else for folk to do - from now on (even if I might well have your address already) I'm going to need you to drop me an email to claim the prize and also include your current address so I'm absolutely sure your address is up to date. Yup, I recently got caught out! Also, sometimes I've needed to hold packages back if folk are away on holiday and don't want them to arrive before they return home. My email address is on the right hand sidebar.

And here's this coming week's prize, which is in fact three BOLD stamp sets for you to play with. They will potentially all go to one winner - if the person drawn has said they would like to win ALL of them.

First of all is a Stampin' Up 'Botanicals for You' set, which is A if you want it. Kindly donated by Sarn, and I used my own set on today's snippet card: 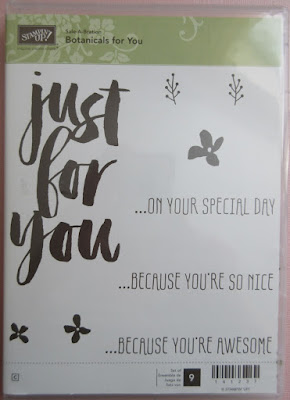 Next is a Paper Smooches 'Kudos Two' sentiments set which is B if you want it, kindly donated by Tara of Seven Hills Crafts: 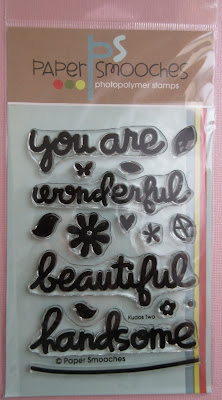 And also another Paper Smooches sentiments set called 'Have Faith', which is C if you want it, again kindly donated by Tara of Seven Hills Crafts: 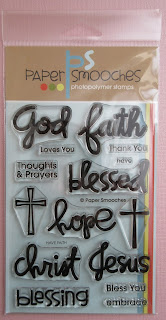 All you have to do, if you want to be 'in it to win it', is to say in a comment if you'd like to play for all three, two or just one of the stamp sets. I've labelled them A, B and C to make it easier - or, just say ALL if that's your choice. If you win and only want part of the prize then I'll do a second/possible third draw for whatever it is you don't want. But, you can win them all together if that's your preference.

I would normally bundle all the stamps sets and say it's 'winner takes all regardless' - but I'm giving options as am pretty sure some of you will at least already have the Stampin' Up set :)

The Snippets Challenge will run for one week and the Playground gates will close at 11am UK time on Saturday 20th August. The gates will open again at midnight UK time on the same day.

I do still have one last sentiments stamp set which Tara donated (it's the really popular 'Sentiment Sampler' set, but will be offering that another week - along with something else from me :) I am trying to whittle the toy box down, it's overflowing despite me trying to put the brakes on always purchasing duplicates of stuff - one for me and one for the Playground. So coming weeks may have some bumper prizes, and I'm sure there's lots that you'll like as well!