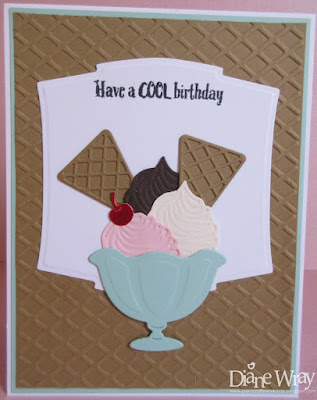 - next used a piece of SU's 'Soft Suede' to emboss a wafer pattern, using the embossing folder from the same set that the dies came with and trimmed it to just slightly smaller than the 'Pool Party' layer before gluing it in place

- I already had snippets of chocolate brown, cream and pink card for the ice cream whirls out on the desk so I added snippets of SU's 'Pool Party' and 'Soft Suede', plus a tiny snippet of red silk mirri card for the cherry and die cut all the elements I needed using that same little set of dies

- stamped the sentiment (again from the free set)  onto a piece of white card using Memento 'Tuxedo Black' ink, die cut it using a Spellbinders Labels 2 die and embossed round the edge using a ball ended embossing tool (for speed and ease)

I have to be honest and say that the quality of the sentiment stamps isn't brilliant, even using the Misti. But, the rest of the set (dies and embossing folder) more than makes up for that.