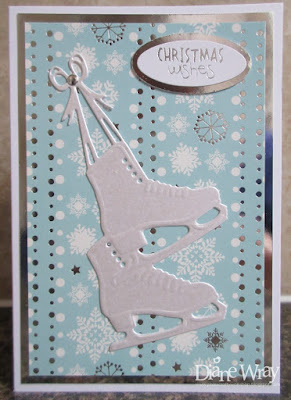 This is so pretty Di.

Hi Miss Di, a beautiful card love the paper you used and the die is perfect for Christmas in the U.K... have a wonderful weekend... Megan

Excellent card. The snowflake paper is perfect for the ice skates. Did you use your cuttle bug to emboss with? Hugs Mrs A.

Yes I did! Used the 'tan' mat in between the die with die cut still in it and a second B plate. It sort of 'squishes' the softish rubber of the mat into the die which gives the good embossing.

A fabulous card Di and those skates are great backed with that pretty paper and the silver mirri gives lots of gorgeous shine. x

Beautiful Card, I love the backing paper and the gorgeous skates die.

Super card, Di. I love the backing paper and what a lovely die. I can see all the embossed detail really clearly. xx

What a nice chilly card!

Awesome Christmas card! You can never be too early to make them! After all its not much longer and Christmas is just around the corner.....

What a lovely card, Di. It's always nice to see something a little bit different from the usual Christmas designs. Pretty. x

What a fun Christmas card, nice to see something different than the usual snowmen, trees etc. Cara x

Gosh! Christmas, Oh dear LOL Like the skates, lovely card Di :D Thank you for your visit lovely to see you..... We did have the best time :D xx

Lovely card and design. Looks fabby. Thanks for joining us over at the Winter Wonderland.
Love n hugs
Marie

Thank you for sharing this great card with us at Winter Wonderland. Good luck and we would love to see you again. Christine DT x

Beautiful card...love the die cuts and lovely winter colours. Thanks for playing along with us at Winter Wonderland. Pat K x

Love these die cut skates, Di! It's good to think about ice when it's hot like this!

This has such a fabulous icy feel to it - I love the colour and those die cut skates. Thank you for joining in our challenge at Winter Wonderland.
Alison x

Great card - thanks for joining us at Craftyhazelnut's Christmas Challenge Extra.

Hope to see you again soon.