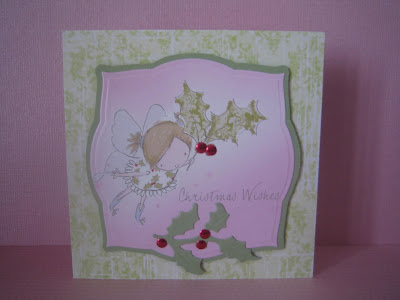 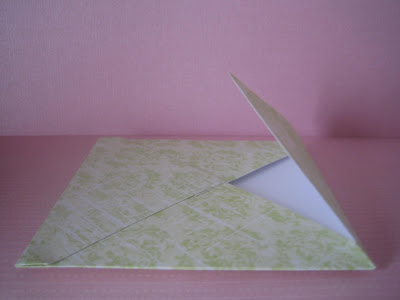 This is such a darling card, Di! And the matching envelope is amazing. Sounds like a great tool!

Theres a flippin tool for doing what I been doing by hand?!!!! Tell me more!!! Got me stack of christmss fronts snd some of the wording inside the cards too where considerate peepoles havn't scrawled all over it that is. I have even sorted me drawers out and moved me bloomers into another one (Hands to yourself Jules) so now I have a Christmas drawer all to itself cramed full of goodies.
Gosh am I organised or what. time for a little drinkie methinks. Hugs Mrs A.

Ah, Di, you have done exactly what I have done cut up two shop bought cards Saturday for my very first bit of crafting for 2013 and for over a month or so now.. and have two cards done for Christmas 2013, not sure if will have time to blog them though.. love your envelope too, love Shaz in oz.x

This is so sweet. That is a pretty little card front.
Thanks for the tip...I am always looking for tips for me but especially tips that make it easier for little Miss C. Wee hands are not always as steady as ours so this will be a good one for her.

Oh this is so gorgeous Di love the image.
luv
Debby

Love your card Di and the matching envelope really finishes it off so beautifully.
Hugs,
A x

Great idea to cut up our old Christmas cards Di, I'm sure peeps have been doing it for years but it never occurred to daft ole me, duh!

Bought myself a Josy Rose and love it, one of the cards l have to share this week proudly has nail heads on it.

Love your card and matching envelope, l like co-ordinating :)

Have a good Monday xx

P.S. thanks for the offer of more cards, l'll keep you informed on how they sell, fingers crossed heh?

I've just ordered the new WRMemory Keepers envelope board (called Envelope Punch which is actually a bit misleading). Not out yet but should be after CHA and it looks pretty much idiot proof and includes a punch to round where needed. Best envelope maker I've seen and, as I've never bought one .... allows you to make over 60 different sizes as well. Pre-order at Oyster Stamps and here's video http://www.youtube.com/watch?v=pDxZnY8ACNk&list=UUAlamYPV5X2_qnzHD8OWUAg&index=4

I absolutely LOVE my Enveloper Pro board and wouldn't be without it. I will email you with some other sizes I use which will make it even MORE useful to you.

I see you didn't cut your edge corners off, tut tut!!!! (I didn't follow the instructions properly at first either, but it does make a difference!).

Also . . . I often use a corner rounder on the flap. Just sayin!

Oh, and I adore the recycled card you've made.

Please feel free to dismantle and re-use any of the cards I've sent you.

Such a lovely card - I try and recycle as many cards as I can too!

This is a lovely card, and you've done a fab recycling job. Love the envelope & maybe you can do a tutorial on using it? I've got one bought years ago at a craft show, looked at the dvd, STILL can't use it properly. My cards finish up odd sizes too many times & I have to hunt for an envelope. So happy you had a fun time spending your gift cards. What fun. TFS

Ooo get you, Mrs, matching envelopes, how very posh is there no end to your talents.
Great card though and the envelope looks fab.

Hello Di, lovely card - great re-use of a pretty card. Thanks for the mention - and I was sure you'd recognise the card on the back of one of the albums - it was tooooo pretty to hide away :) I expect the one I've submitted to Hazel's CHNC this week is familiar too. Not surprised your 'pickled tink' with the envelope maker - I'm sure it will prove to be worth it's weight in gold over time. Hugs, Elizabeth xx

Thanks, Di, for entering this lovely card into both my CHNC challenges (I must really be cracking up because I thought I'd already left you a comment) x

Very clever Di! Love these colours. And love your blog because it makes me smile! Thanks for joining us at CHNC. Hugs Fiona x