We Three Kings of Orient are

......is one Christmas carol that always reminds me of yet another one of my 'sillies' - but first here's the card I made: 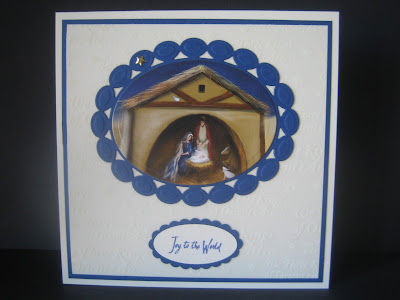 Been sifting through Christmas cards here and keeping some to 'up cycle' - and then I saw over at Shaz's blog how she'd die cut an image from a Christmas card rather than just cutting it into a square or oblong as I generally do. Her result is beautiful - do go and see what I mean!

And, I wanted to make a card for this week's Crafty Hazelnut's Christmas Challenge which is 'Rudolph is resting', so no Rudolph images.

- vellum with the words 'We Three Kings of Orient are' printed all over - which reminded me of the little tale further down this post. Attached the vellum to more cream card stock by using part of a double sided adhesive sheet - the wording shows up better when the light catches it properly

Resisted the urge to add anything else as I wanted the real message of Christmas in this card to be the focus.

Right, and here's my tale - 100% true, but I bet I'm not the only child ever to have wondered about this one.

As a child we had a routine (this was pre-dishwasher days of course!) whereby Mum cooked the evening meal and Dad and I did the washing up between us while she sat down with a well earned cup of tea - he washed and I dried. And we sang - oh how we sang - every show tune and song imaginable!

As soon as there was a whiff of Christmas in the air I would be hopping up and down begging for us to begin singing Christmas carols as we did the dishes - 'Good King Wenceslas' was my very favourite as Dad sang the part of the king and I sang piped out the part of the page.

I must have only been about six or seven years old  when I stopped Dad in the midst of 'We Three Kings' and said it puzzled me. Why did we sing about three kings when there were only two of them I wanted to know?

Dad could see I was really very confused and had been waiting for the right time to ask - so he stopped putting dishes away and gently asked me just why I thought there were only two kings.

'Well Daddy' said little Miss Clever 'it goes like this.........We three kings, Ovori and Tar......but that's only two of them so where's the third one?'.  Absolutely true - and one of those tales that Dad delighted in telling my boyfriends when I was older!