Ha, now there's a long word for starters - spheksophobia. It means, fear of these little perishers: 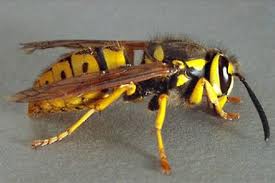 And if you combine the above with these jeans below - that's double-trouble: 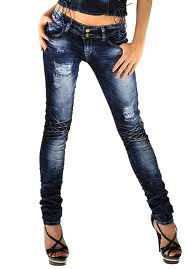 I was reminded of today's tale by something Rach said on her blog about being terrified of wasps - ever since she was stung inside her ear, big ouch, poor kid. If you're reading this Rach you might want to run away now :)

Many years ago, when I was aged almost 16, a fashion trend for skinny jeans (known then as drainpipes) hit the streets. My parents wouldn't buy me any, so undeterred I set to and did some alterations of my own on the quiet. All you did was to made a double fold down the inside of each leg and stitched it tightly right down the seam - I did it all by hand too :(

During the Summer hols from school in Germany I went away with my parents to Switzerland camping and said 'skinny jeans' were secretly packed and produced with a flourish at the other end! Snort, oh the price of vanity :(

So, here we are, in a supermarket about halfway through the fortnight at the checkout, with me sporting these jeans, which were so tight they were almost impossible to get on and off. I'd sneakily packed no other trousers and jeans either so Mum had been forced to let me wear them. Suddenly, I felt a tickle on my right calf and idly scratched it - 'sting!'- OUCH, that hurt. So I rubbed the leg through said jeans and got another sting for my trouble, then another. By this time panic was setting in as I tried to pull up the leg of those wretched jeans - to no avail of course. Sting followed sting as I realised that little fella who had somehow crawled up inside the leg of 'oh so trendy but totally stupid' jeans meant business - we were standing at the checkout and a bag of sugar had spilled and a little wasp party was going on :(

In a state of panic, and unable to hoist the leg of tight jeans up, what was a girl to do? Yup, I unzipped them and whipped them down to my ankles whilst squealing like a stuck pig! Of course, this attracted attention from other shoppers and an assistant who rushed over, grabbed a bottle of vinegar from a shelf and tried to usher said squealing piglet into the manager's office.

Well, that was akin to running the marathon in a sack, I did try truly, but the little dance of 'bunny hop twice, jump up and down, then two shuffles, two more bunny hops and repeat again with jeans around the ankles' didn't get me far - I couldn't move really. As mayhem began to break out the manager himself appeared - a large chap with a handlebar moustache I seem to recall - from what I saw of him.

He took one look and then decided action was needed 'Right, vee sort zis out' he barked - and without any more ado grabbed me round the waist, tucked me under his arm and charged towards his office. Yeah, right - eyes popping like a frog and still squeaking in pain - there I was, with me rear end exposed (apart from a pair of briefs, thankfully) and jeans around me ankles, being carried like a rag doll to his office.

My parents, I swear to this day, were almost exploding with laughter - me, I was totally mortified. Copious amounts of vinegar later we were sent on our way with a very large bottle of vinegar and no supermarket bill to pay either, they waived the bill - I think to get rid of the teenage 'shuffle-hop and look at my bum' dancer!

I do remember lying on the back seat of Dad's car, whimpering and applying wads of vinegar soaked cotton wool to what turned out to be seven wasp stings all the way back to the campsite. And you know what? I distinctly heard my Dad say to my Mum, 'Such a shame it wasn't a full week's groceries darling'. What the heck was that all about then?!

No wonder I hate wasps with a vengeance, and I do sympathise Rach!