A Tuesday Tale - how to have a good send off

Maybe I have a dark sense of humour, but I've never forgotten one thing about the awful bleakness of my Mum's funeral many years ago - she died tragically and accidentally but had always wanted to be buried in the family plot, which was in a different Parish to the one that the funeral company knew. On the way to the service and burial, Dad and I were in the first black limo. behind the hearse - and after passing the same route a few times it was obvious we were lost. Dad squeezed my hand and whispered 'You know what chick, your Mum never could navigate!'. I never forgot that moment of sad, yet true humour, in the depths of despair.

Yesterday was a day to rejoice, and cry, over the lives of Mary and Ken:


And, yesterday's Thanksgiving Service for Mary and Ken who died recently, was also punctuated by humour. Both Mary and Ken had been sort of planning for this and so many things did have us laughing, in between the tears - despite their insistence that it should be a joyful occasion I do think that many of us, not least yours truly, were shedding tears for themselves at the loss of two really amazing people from our lives. These things happened or were said yesterday during the Thanksgiving Service, by the Padre and others.

1. Mary was a staunch Christian and church goer - Ken, when he did attend on special occasions, genuinely had the Garrison Padre wondering if the roof might cave in - this came from the Padre today!

2. A couple of years ago, when Padre was collecting Mary to take her to church one Sunday, Ken took him to one side once Mary was safely buckled into the passenger seat and the car was ready to go. He quietly said that he would like the Padre to conduct his funeral service when the time came - to which the response was 'Of course, it would be my pleasure'. At this, Ken sort of raised his eyebrows and replied 'Not quite the eager response I expected Padre'.

3. The first hymn yesterday, chosen by a non-church going Ken, was 'Onward Christian Soldiers' and if you've ever sung every single verse of this, almost in marching tempo, you have to think that Ken was having a secret smile.

4. At the age of 82 Mary was still volunteering for everything going, she was on every fund raising committee and action group going the whole time I knew her, and immediately put her name down for a fund raising 'zip-line'. It's thought that she really imagined it was something to do with sewing - but, game as she was when the truth dawned she did the zip-line, squealing the whole time, and then hung there like a limp puppet waiting to be released :)

5. The programme had these words from Ken ' Please do adjourn to xxxx for refreshments. It will be your last chance to have a last drink at my expense' and I can just hear him saying it, very much tongue in cheek. His ambition, spoken about privately to Len, was to die owing millions - or, we heard from one son today, to be stabbed in the back by a jealous husband :) Even the Padre came up with a beauty - Ken wasn't known for his punctuality (I know I can vouch for this from my childhood) and he'd wryly remarked to the Padre - 'Well, at least when I die I'll have really earned the name the Late Ken xxxxx.

6. Mary's words on the programme were 'Thank you everyone for coming. My love and God Bless'. 'Love and God Bless' was always Mary's sign off on letters and cards, I'll miss it so very much. She wrote to me every single week when I was at boarding school, and that must have taken some dedication.Mary and Ken were different in many ways, yet so perfectly suited :)

I confess that I wept when I saw their beautiful photo taken together at their Diamond Anniversary, both on the programme and the altar - tears of happiness for sharing in their lives, and tears of pure selfishness to know they are gone - and most of all, tears of quiet joy that they are together still.

I know that Tuesday Tales are meant to be funny - but if you think about this, there are some pretty dry gems from Ken :) Two truly remarkable people who were only second to my own parents - and they left us with a smile and happy memories, once the heartache heals.

Lastly, Pete their eldest son found this trinket box in their house and gave it to me today. I made it for their Golden Wedding Anniversary, and from the ring imprints in it Mary used it to pop her rings into it each night. We also added a bottle of champagne for them at the time, or perhaps a decent bottle of whisky - little grin, that had been consumed long ago: 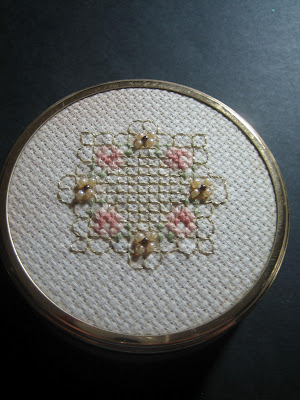 My love to you, if you even read this far! Treasure all those you like and love while you can.