It's Rudolph Day tomorrow and I'm actually a day early - rarely ever early for things, normally screeching in at the last minute :)

I've had this stamp for a while now, bought on offer from The Handy Hippo just after last Christmas. I coloured the image first and thought about the papers afterwards, not usually a good move for me :( 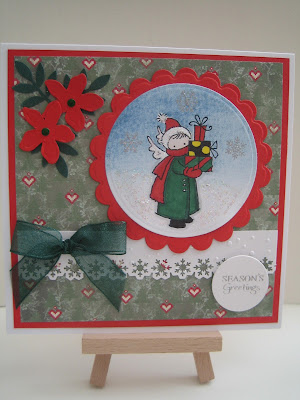 I stamped the image and then masked it using Woodware Magi-film, as shown here (I love that stuff!!!), before colouring the sky with TH Faded Jeans Distress Ink and a duster brush. After colouring the image with Pro Markers I then sat gawping at it for a couple of days - procrastinating (thanks Dee for using today's long word in a recent email!!) - about what to do next. Thankfully some new Christmas backing papers arrived in the post, I spotted the cute little hearts on a background of muted holly (it looked to me a bit Scandinavian) and then I was on a roll :)

At the same time a new MS PATP set arrived (Aspen Snowflakes), one I've wanted for ages - on offer at Samuel Taylor's so it would have been rude not to buy it. Fabby punch which I just used straight for the white edging strip before running it through the Cuttlebug using one of my fave embossing folders. I think it was about the first one I ever bought.

All the white, red and dark green card came out of my snippets folder so I'm entering the card into this weeks snippets challenge over at Jules'.

I'm also entering it into:

- DecoArt Glamour Dust to add twinkle to the angel's wings, hat and the stars

- Ice Stickles 'Crystal Ice' - a blob squeezed onto paper and picked up with a soft brush to add sparkle to the snow - I never use Stickles straight from the bottle, neither of us can be trusted!


- Red card, cut using a Nesties scalloped die, behind the image and also a square behind the patterned paper - from snippets
- Patterned paper by Marianne Design - 'Merry Little Christmas' set
- Craftwork Cards Christmas sentiment
- Lacy strip of white card - punched with MS Aspen Snowflakes punch and embossed - from snippets
- Leaves punched using MS punch, flowers using X-Cut 3d punch and emboss - topped with green Josy Rose nail heads
- dark green organza bow using ribbon from my stash and the bow maker I've had for ages :)
I made two the same - am playing catch up now before panic sets in!!
Hope you have a great weekend! Ally Pally for me tomorrow :))
Di
x
Posted by Di at 07:23