Birthday card for a man - don't faint clean away!

Out of all the posts on here, only 16 are birthday cards for boys/men, and most of those are for boys rather than men - shame on me! Like so many, I struggle with card for 'chaps' but yesterday was different. I was rootling around in my stash, sighing at so much unused stuff and thinking that I really need to send a lot of my toppers to a charity for use in day centres and such where they would be easy for others to play with. Nothing wrong with a bit of picking up and sticking down - that's probably how most of use started out on this road years ago anyhow :) But, I'm digressing (yay, today's big word!).

In one of several boxes of toppers I found a little packet of shirts I'd already made up - from a kit bought about six years ago. We were on holiday in Gibraltar and came across a little (tiny really) craft shop tucked away in a quiet back street run by an English ex-pat - I think she had the shop mostly for fun rather than profit. I came away with some odds and ends, including a packet containing six 3" x 6" strips of precut paper and a little guide with a hand drawn sketch. It was all just folding with four little snips to finish off - great fun too!

This is the card I made yesterday: 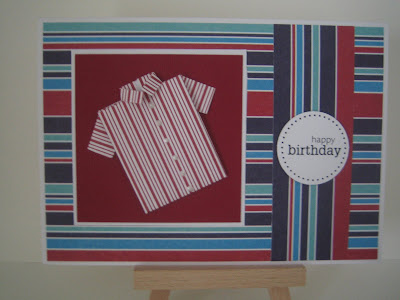 The hardest part was finding the matching stripey background paper - it came from one of those double pages of free papers in the centre of a craft magazine yonks ago. You know, the ones you wonder if you'll ever really use :)

Actually, the really hardest part was not poking at the 'buttons' before the Liquid Pearls dried :))

- C6 plain white card stock
- Background striped paper, from stash
- Red and white backing card, both from snippets
- Folded shirt - from stash
- Buttons on the shirt - White Opal Liquid Pearls
- Sentiment - Craftwork Cards
I've got the rest of these little babies to use up and, since St Luke's Hospice Charity Card Challenge have listed Male Cards in their most requested cards, I know just where these will be going once I finish playing :) I hadn't realised that St. Luke's was the charity that my late (and much missed) French teacher Betty supported until just the other day - so it seems extra fitting that I've been sending cards to them for their fund raising without even making the connection. Someone up there is still giving me a little nudge now and then :) Right up until our last reunion she was teasingly threatening to give us detention - and I had enough of that at school (yeah, OK, generally for talking too much!).


I've mooched round some of the current challenges and would like to enter this offering to:

Hope you all have a great weekend, whatever the weather and whatever you're doing!