What is it about the sweetness of children in the annual Christmas Play? That's the politically correct way apparently of saying Nativity Play :(

I did a stint as an Infant School Governor and the highlight of the year for me was always the Nativity Play. Inevitably someone needed the loo in the middle of the proceedings, angels burst into tears totally overwhelmed by it all and each and every infant craned to see their relatives in the audience - always breaking ranks to wave and sometimes even doing a little twirl or a hop and a skip. Sooooo sweet - I used to be torn between moist eyes and trying to stifle the giggles :)

One year we had a load of amazing sheep costumes, sourced I think from Woolworths, plus a splendid camel costume (although the hump kept 'wibble wobbling' from side to side!). At the dress rehearsal there was such excitement as the little ones were all checked if they needed the loo before being zipped into their sheep costumes, noses were blown - and then the fun began. One little boy idly pulled on one of his 'sheep's ears' and lo and behold - a miracle............a loud 'baaaaaaa' came out of the ear, an additional feature of the costume that had been totally missed in the excitement of getting a bargain! Straight away all the other sheep followed suit of course, each tweaking their ears and rolling round giggling. Finally, order was restored and the Headmistress, made a very stern announcement - 'During the Play I shall have a very LARGE pair of scissors in my pocket. Just one teensy little 'baaaa' and I shall immediately chop your sheep's ears right off!!'.  And, true to her word, the next day just before we had 'Lights, camera, action' - the scissors were dangled in front of the sheep.......who behaved beautifully needless to say :)

So, when I was sorting out Christmas stash to use this year I was delighted to find a LOTV unused stamp from last year, somehow hidden amongst a box of backing papers. It's my very favourite LOTV Christmas stamp and I'd wondered where it was hiding so I set to right away and produced these: 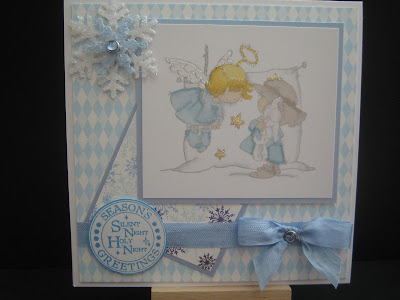 Oh dear, this LOTV image does make me smile - those little spindly legs dangling with her socks hanging off and the rope round her waist!

- DecoArt Glamour Dust add twinkle to the angel's wings, halo and the stars - applied by just touching little bits with a Quickie Glue Pen, sprinkling with Glamour Dust...........and then walking round sparkling for the rest of the day! BUT, it's much better and more delicate than chunky blobs of Stickles - for certain things at least

- Blue pearlescent card for matting and also for the top layer of the snowflakes
- Patterned papers from an A5 Daisy and Dandelion 'Penelope and Percy' Christmas paper pack (bought last Christmas)
- LOTV Christmas sentiment, stamped in Pearlescent Blue and then heat embossed
- Seam binding in 'Queen Blue' from The Ribbon Girl - tied into a bow and fastened with a Moonstone Blue Brad - sent to me by Dee
-Snowflakes made from Marianne Creatables Norwegian Snowflake die cuts in white and pearlescent blue, painted with Anita's Gloss and dunked into Twinklets Diamond Dust - fastened together with Moonstone Blue brads, again from Dee (thank you again Dee!!)
I'm entering this into :


And the best thing about today? News that Wipso's little grand children (twins) were born this morning - many congratulations!!!!! For the full news - hop over here to Annie's blog. Big smiles here :))