Eek, where did last week go to? Wherever it went, it took the sunshine with it :( To brighten ('brighten' can be either a transitive or an intransitive verb - so that's two big words for today!) your day up - it's time for the weekly snoop to see what everyone else is up to. Before I look, I just bet a lot of people will be thinking of Christmas already - this is beginning to worry me! They were even putting out the displays of Christmas chocolates in Sainsburys yesterday for goodness sakes!

This is what's on my desk right now - and it sure ain't Christmas: 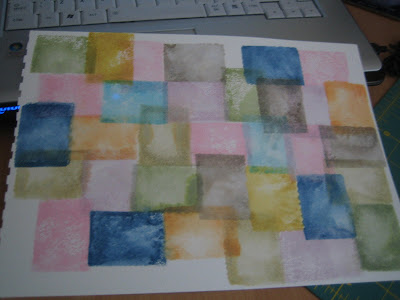 I've been despairing over the bunch of Tim Holtz Distress Inks that are much dryer than others say they should be since last week and decided to beat the h*ll out of them have another try. Ahem, think I got a bit carried away and now I haven't a clue what to do with the result so it's being moved from one place to another on my desk whilst I wait for inspiration:( I took each of the driest ink pads in turn, furiously rubbed each pad over a small oblong block, spritzed with water and then stamped a sort of patchwork pattern onto watercolour paper. Quite pretty, but so far totally useless!!!

As I already had inky paws it was time to play with cloud backgrounds and masking images. I'd finally come across Woodware Magi-film last week: 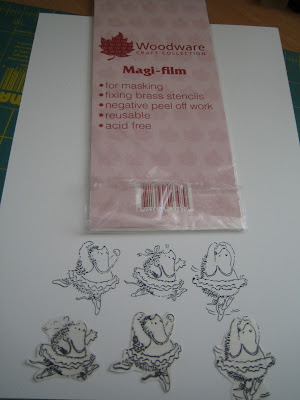 It's great stuff!! Much better than trying to mask using a Post-it, which I found kept flipping up - plus you can see through it which makes aligning over the image you want to mask out a doddle! It's re-usable clear film so if you plan to make a few cards using the same image, keep the backing, replace it after using the mask then store it with the stamp for future use - I'm all for saving time and effort:)

First I stamped the Penny Black hedgies onto white card using Memento, and then onto the Magi-film using Stayzon (it would smudge otherwise I'm sure). The little hedgies were then cut out of the film and are on the bottom of the page above waiting for the backing paper to be peeled off. 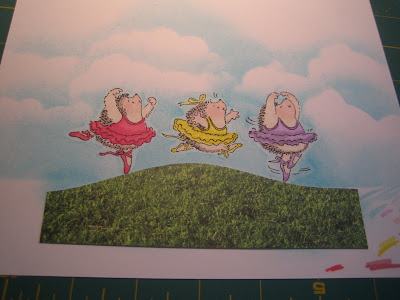 This is the image after doing the clouds (I posted about these here) then colouring with Pro Markers and a piece of card I'm playing round with for some grass. As always, I made a boo-boo and didn't trim close enough to the images so ended up with a white outline round them. If you have the same problem and you used Tumbled Glass for the clouds, I found that my 'Cool Aqua' Pro Marker was a help to colour over the white patches and a pretty good match too! Well, a blind man on a galloping horse wouldn't notice I suppose :))

And just in case you think it's all organised and tidy here - a swift swing to the right proves otherwise I think! 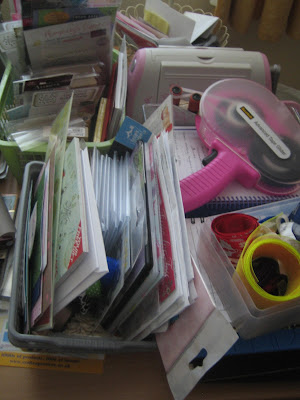 The messy basket at the front is full of stuff I've been playing with and have yet to put back into their proper places. The basket behind has unused stuff in for more playing and the plastic box right at the front right has Christmas ribbons and lace in. Sheesh! What am I saying - Christmas?! Nothing for it I suppose but to follow suit and begin in earnest!

Before then, I'm off to make another cup of coffee and have a snoop over at Julia's - see you there! I've just had a peek at her desk and it is the most glorious mess - wonderful stuff!! :))