Recently I was posting on here about the fact that perhaps the hedgehogs need to get a job to pay for their food. That gave rise to some very amusing comments about Boy Bands - then I wondered, what if they were lady hedgehogs. Girl Band? OR, a dance troupe called 'The Prancing Prickles' perhaps?

I think I really do need to get out a bit more - but little cogs began to turn and I remembered a Penny Black stamp that I've had for many years. Yesterday on WOYWW I was squeaking with delight at finally cracking masking (well, almost!) using the amazing Magi-film made by Woodware. So, I played a bit and ended up with this card - it reminds me a bit of the opening scene in 'The Sound of Music': 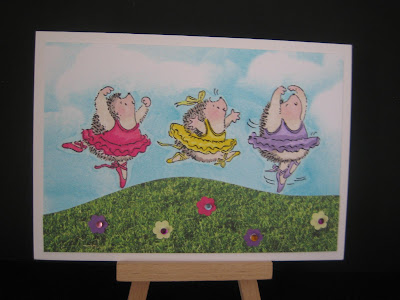 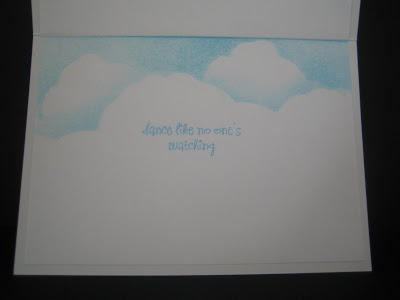 Moira commented yesterday about school reunions and our prancing antics - little did she know how close she was to the mark 'cos this card is being sent to a fellow ex-pupil who has just had a hip replacement op. You'll remember Helga (Smith at the time) as the Dancer in the school production of Peer Gynt Moira? She had a walking stick in June at our last reunion and is now sporting a brand new hip:) I went down the same route six years ago and can honestly say it gave me my life back, I felt about 20 years younger after the op. - shame they didn't throw in some work on the face at the same time :)

So, the sentiment 'Dance like no-one's watching' seemed especially appropriate! I love this PB hedgies stamp, it always makes me smile - especially the little one doing a pirouette (sneaked today's big word in there nicely!).

Oh man, I want to enter this into the current Penny Black challenge which is 'Create a Scene' (I only know this from Jules and a couple of other bloggy friends who hop in here) and have just hopped over to check the expiry date. At least one of the DT cards (especially Helen's) also uses a little hill and some sky! At the risk of being disqualified for plagiarism (second big word of the day) I'm still going to enter this card - mostly as it's a luck of the draw challenge, not the actual design and also 'cos I genuinely didn't know. Why me?! I suppose realistically there are only so many scenes you can create :(

So, here goes with the entry anyhow:

- C6 plain white card stock
- Image - Penny Black 2361K 'Ecarte, Splits, Pirouette'
- Sentiment - Bella Stamping
- Pro Markers
- Inks - Memento Black for the image and Tsukineko  Brilliance - Pearlescent Sky Blue for the sentiment, Tim Holtz Tumbled Glass for the sky
- Card for the grassy hill from my snippets
- Little flowers punched from snippets and pearly stones for the centres from my stash
Thanks for calling by and for all your lovely comments - mwah!!
Di
x
Posted by Di at 11:46