Well, that was a bit of fun and games! I was typing this whilst watching the weather on TV (it's gonna be hot they say!), with my 'wakey-wakey' cup of tea and accidentally pressed Control and P together, rather than Shift and P for a capital! That woke me up in a hurry 'cos Blogger only flipping well published a half typed recipe, complete with typos and goodness knows what! Sheesh - does anyone know how to un-publish without deleting the thing? I just did a copy and paste to a word processing document and then a swift delete of what was a load of misspelt, badly spaced text! Ha, a load of haddocks-wallop instead of a load of cods-wallop!

It probably serves me right - just before the weather report, whilst typing this recipe, I'd been getting sooooo cross with a line of discussion on Breakfast TV. The debate was whether Shakespeare did actually write all his plays etc. or was it someone else. I personally don't think it'll change my life one way or another if he did or he didn't, but the guy from something like the Shakespeare Trust arguing in favour of it having been Shakespeare all along was so vociferous (yay, today's big word!), overbearing and downright rude that I got all riled.

Then, the camera zoomed right in on him - and I lost it at that point. The Mrs Victor Meldrew in me took over, the laptop went for six, as I jumped up and down whilst pointing at the TV screen squealing ' Look, look, he's got stains all down the front of his jumper - how can you possibly trust a man like that?!'. At that point, my OH who was also watching, almost choked on his tea as I was obviously kicking the day off to a good start!! :) All I can say is, that pro-Shakespeare chap obviously hasn't heard of stain remover! Speaking of stain remover, a quick fix is a Wet Wipe - not the baby ones but the ones with alcohol in that are murder if you get them near your eyes.

for the mushroom layer
15ml spoon olive oil
250g mushrooms - sliced
bunch salad onions
Preheat oven to 200 degrees C, 400 degrees F, Gas Mark 6.
Place the milk and haddock in a saucepan, bring to the boil and then gently simmer for 3-4 minutes until the fish is just cooked. Strain, reserving the milk. Flake the fish, discarding any skin and bones.
Melt 40g of the butter in a pan, stir in the flour and cook for 1 minute. Gradually stir in the reserved milk, bring to the boil and simmer for 1 minute, stirring continually until thickened and smooth. Season to taste.
Place the fish in an oven proof dish and pour over the sauce.
For the topping, mash the potatoes with the remaining 25g of butter, the milk and most of the Parmesan.
For the mushroom layer, heat the oil in a saucepan, stir in the mushrooms and spring onions and cook for 8-10 minutes until golden.
Spread the mushroom mixture over the fish and sauce, then top with the cheesy mashed potato.
Scatter over remaining Parmesan and bake for 25 minutes until piping hot and golden.
Serve with peas or green beans.
Things I would do differently - our oven heats up in next to no time so I certainly wouldn't preheat it right at the start of this recipe. And, although this is very tasty and I've made it a few times for a change, for simplicity you can't beat a good old mix of white fish, smoked fish and prawns in a sauce just topped with mashed potato. 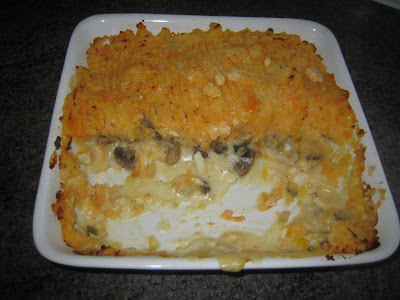 Yippee, the sun is shining here - I wonder how long it'll last :)