Thankfully it's a little bit or a lot of white to be used over at Crafty Hazelnut's Christmas Challenge. And I'll also be entering my card into Crafty Hazlenut's Christmas Challenge Extra - which is always 'Anything goe so long as it's for Christmas'. I'd have LOVED to make an all white card but just knew that as a first try it would take me ages. However, I've been itching to use a new Christmas Tree die set for months so this is what I came up with - and it was so easy I made two the same, despite other pressing things to be doing: 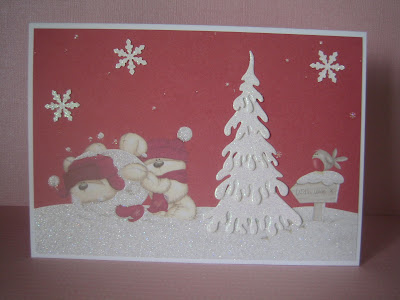 I'll be running round today, checking lists and buying wine for nibbles and drinkies in my room before dinner over the school reunion weekend - a long established tradition to kick start the evenings. Now where did I put those mahooooosive plastic wine glasses?

The big down side is that my bestest buddy (from when we were both aged 13) won't be there as she's not been well :( I know you peek in here Moira - we know where you live and will be 'bringing the circus' up to you before many weeks have passed as agreed, that's a promise.Or even a threat - you don't get away from us THAT easily :) Big hug to you meanwhile Moira!

Very nice use of white. Your tree die is to die for...now that was corny, but I couldn't help myself. Have a wonderful weekend.

that's a fab tree, have a wonderful time at the reunion, hope they like your gifts
Tilly

I LOVE this tree, Di! A beautiful Christmas card!

Lovely card, Di, love the white Christmas tree. Sorry to read that your friend won't make it - I wish her a speedy recovery and hopefully she will be at the bash next year. Hugs, Elizabeth xx

Must have that die Di (gotta up Mary!s comment). Never heard of them before . Hugs Mrs a.

fab card and yes that die! and agree with Mary!! and the "six times commenter" Mrs. A. - still chuckling from post up above..have superb Reunion Shaz in oz.x

Ooh, I recognized that die!!! And how lovely it turned out for you on this card. Sure did look mah-vy with the reds...Your whites just sparkled. Great card & I'm amazed you had the time. I think I'll have you coordinate my next trip, if you will. Sorry to hear your BFF won't be at your reunion, but hope ya'll get to visit later & enjoy. Hugs

Beautiful card, Di and way to go to make two - looks a good die - thanks for sharing this for both of my CHNC challenges x

lol this image made me chuckle :)
super card!!! so glad you linked up with CHNC Extra this month
Rose GD

So pretty - I love red and white cards!!
Sandy