A 'corking' idea from Katina

This month's Quick Cards Made Easy magazine had another great article by Katina, using cork on cards. I practically CASE'd one of Katina's lovely cards and made this: 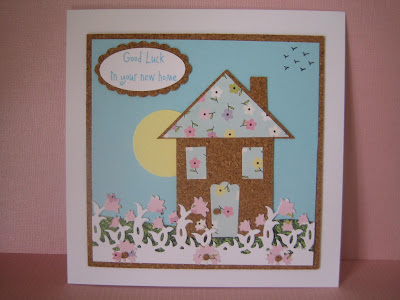 - turquoise card from the snippets folder and a snippet of yellow card for the sun, punched with a round punch

- cork backing and a little house made from cork - the house shape was just a 2" x 2" square with another square the same size, sliced diagonally for the roof, plus a snippet from the other triangle I was left with for the chimney (it's already cut at the same angle so that reduced some fiddling about. The cork is DCWV adhesive cork and I bought mine from EBay where the seller had just six sheets in packs - a nice amount to play around with

- the roof, windows and door are all cut from snippets of Pink Petticoat 'Wild Blossoms' collection paper - the door was actually punched using SU's 'Modern Label' die with a bit trimmed off the bottom

- a snippet of KanBan'Green Grass' card along the bottom with a white die cut border using La La Land's 'Tulip Border' die. I then die cut more of the border using another paper from the 'Wild Blossoms' collection and  snipped the heads off and glued them to the flowers - plus a few along the bottom...........really need to get out more!

- the sentiment is an Elzybells one, stamped with Brilliance Pearlescent 'Sky Blue', then punched out with SU's 'Large Oval' punch and matted onto a cork oval which was punched with SU's 'Scallop Oval' punch

- hand drew the birds and then fished a teeny scrap of cork outta the waste basket and using about an eighth of an inch hand punch just punched little centres for the flowers along the bottom of the card - and a door knob :)

Looking at the amount of snippets I used, this would have been more suited to yesterday's Snippets Playground post!

There's another card in the same article I'd like to play around with, using die cut flowers. While the cork is still on the desk that could my next little venture - in between making those reunion bookmarks :) Mind you, I did make a bit dent in them yesterday which is a relief 'cos I do now know it's achievable without sitting up half the night for the next couple of weeks.

This is a perfect card for the snippet folder...the cork looks so special. I used to use it in scrapbooking many years ago and thank goodness that I never throw anything crafty away as it is so in style again!
Dropped you an email as some certain somethings arrived and I am over the moon! You are such a sweetie!!!

I love your card, especially the cord house, and may have to borrow your idea (if you don't mind) as it's perfect for a New Home card I need to make.
luv
irene
xxxx

Love the cork idea Di.
Do you ever ask yourself why you take on so much?
Good luck with the bookmarks.
Hugs
A x

Oh dear Di - now I'm going to have to go and find some cork!! Seriously though its a lovely card and perfect for a new home card.

Great idea Di. Love the idea but my cork is a little too thick! You may need to keep this for someone who we know is hoping to move!!
Hugs
xx

I've some cork sheets somewhere in my stash - love this card, the house is so cute, want to CASE this when I've the time! Karen x

Good job I checked 'view more' or I would have missed this little corker, lol.
Hope no one has put that alread as I don't read previous comments.
Love it, so very professional I am wondering if Len made it, lol he he he.
Those little birds are so handy and a fabulous scene to boot.
I used to use cork if I did anything with a wine/champagne bottle and I used to draw the shape of a cork, then cut it out and place it in the air so it looked as if it had just popped off the bottle.
Very windy and wet here today, promised worse for tomorrow. yuk.

This is brilliant. Katina is just full of bright ideas isn't she?!? A real inspiration.

You have used gorgeous colours .. .. and I wish my house had a flowery roof!!

Lots of snippets here, my dear. And did this card ever shine with all that paper piecing. Looks like it took tons of time with all the details too...and so very pretty...very 'homey feeling'. Would be a great card for a housewarming or change of address. TFS

What a darling little cottage! I think I bought some cork and stashed it away, or was it wood. I need to dig and see what I do have. LOL, it's time to stop buying if I can't remember what I have!

We had a sheet of cork in the garage and just dumped it over the tip. Told The Doc we might need it. Hugs Mrs A.