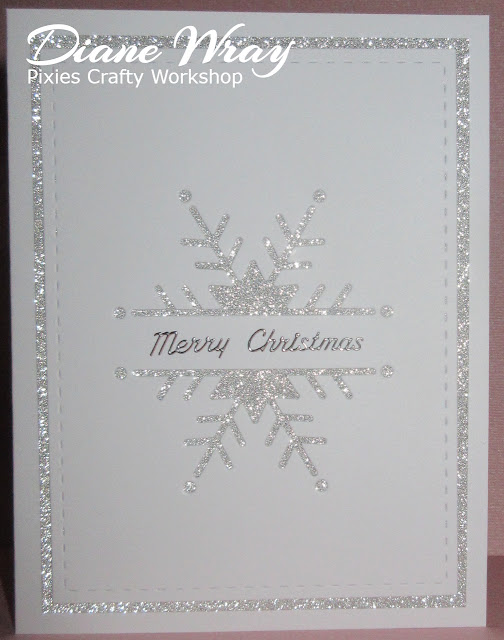 A fabulous card - I love the snowflake die.
Kath x

Beautiful card, Di. I love the sparkle and shine.

Spectacular and sparkly! I love it! Yes, I too was sad that Lil Inkers is closing.

Hello Di, loving your beautiful card, it's so elegant and the sparkly snowflake is gorgeous.
Hope you are keeping well, Kate x

Stunning card Di, so elegant. I haven't come across that snowflake die before - one to add to my wish list I think! Glad to see you using a peel off sentiment. I used one on a recent Christmas card too and if enough of us keep using them, perhaps they will come back into fashion. :-D I probably have enough to open my own peel off shop! LOL! xx

oh, yes, it's very elegant, Di!! the silver sparkle and clean white design is a classic! i hope to join in soon, i just need better hands, more energy and more time in the day, if that's possible. :) Thank you so much for sharing this beauty with us at the Rudolph Days challenge!
Linda

This is what I would call lush Di with all that wonderful sparkle from the silver glitter card, and I love the MB snowflake die which looks great with the break across the middle for the sentiment, and love the stitched rectangle too. x

What a beautiful sparkly card Di, I love the snowflake die.

I love this card. That paper is glorious.

Sorry to hear that Lil Inkers is closing. It's the first I've heard. [Bunny]

your card is stunning, Di. I love the die...it is fabulous. Great idea to use the peel off as that saves time and the silver goes so well with the silver glitter paper.

Was sad to hear another shop is closing. IT is tough for small business owners. They have the normal ups and downs of business to cope with and now have the added pressure of all the counterfeit products!

Oh wow--I absolutely love this card, Di! In fact, I've now added that die to my wishlist! Elegant at it's best!

This is certainly elegant - great that you made it in time!

A fabulous, elegant card, I love it x

Hi Di this is a stunning Christmas card. I love it. Take care. Hugs Jackie

Hi Di,
Happy Rudolf Days.
Sorry my comment is late.
Love this wonderful card and all the lovely glitz.
Such a fab design that snowflake with the sentiment in the middle.
Lots of crafty love. Jenny L.

Oh, what a sparkley beauty this is, Di. I'm on the hunt for that particular die now, having seen what you did and envisioning other possibilities. TFS

Wow, it's so professional and elegant and the silver glittered cardstock looks amazing with white! Great design and such beautiful die!
Hugs and cuddles to Dudley!

What a very pretty card. I love the combination of white and silver. Th stitching on the panel adds the perfect touch...

sparkly and CAS - it looks great.

Wow Di, this is a beautiful and sparkly CASalious card! I love that die you used and I love the way you used it. Glad you squeaked in with this beauty! Hugs, Brenda

I'm so behind in my blog reading. I love the sparkle on this card. I have a dear friend that this would be just perfect for. I'm going to save this post as an idea for her Christmas card. Thanks!