I'm baaaaack! There's quite an improvement in the shoulder - so long as I don't go doing anything silly like stretching up to lift heavy things or anything too repetitive. The ironing has been left well alone (even though I can't find anyone local who does ironing any more - apart from big laundries. In the past I've used a couple of ladies who eventually either moved or got themselves a full time job.) and for now I'm just folding stuff straight from the dryer. To be fair, I generally do that but some things I can't get away with! And, as you advised, I'm also keeping the shoulder mobile so it doesn't freeze up. Thank you all so much for your very kind words when I had to take a step back, the break was a huge help and your comments are so much appreciated. Mwah - what a lovely crowd you are!

So let's get this show on the road again - with quite a nice prize to celebrate eight fun years of me running the Snippets Playground.

And first of all here's my snippets card for this fortnight: 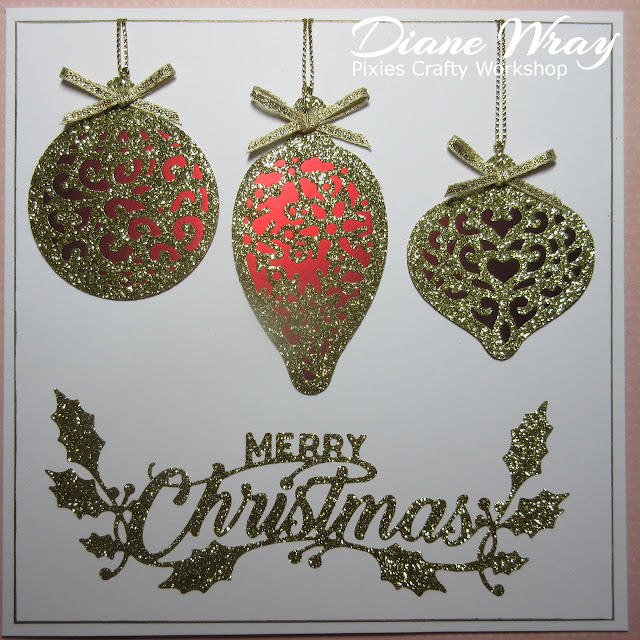 - snippet of white card, trimmed to 5.75" x 5.75" and put to one side after running a gold calligraphy marker around the edges to add a little bit of definition

- it took me a while to think of the best way to attach the baubles to the card front panel, in the end I threaded through then looped and tied some gold cord at the top of the baubles (using a poky tool then a darning needle to thread the cord through the hole)

- then backed each bauble with red line tape and stuck them in place across the card, adhering the gold cords to the back of the panel with more red line tape (NB leaving the protective red layer on!)

- then glued the front panel to the card front - leaving the red line tape protective layer in place meant that the panel still had maneuverability (coo, big word there!)

Dreadful lighting here today (Saturday 11th). Mirri card is hard to photograph at the best of times - but at least you can see how the backing shows through the gold filigree top layer - even though the red satin card is a deep rich red in real life. Such a shame that Joanna Sheen no longer stocks it - nor can I find any other stockists that carry the deep rich red version, sigh.

I bought the sentiment die a while ago, with the idea that it would make a very simple, long, narrow Christmas card with no other additions - and I still think that. But, as a prize I wanted to add something more to it, hence the set of bauble dies I used. 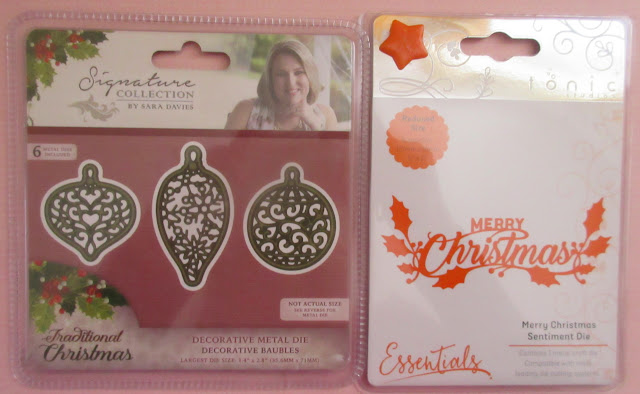 A Crafters Companion 'Three Baubles' set of dies (six dies in total) plus a Tonic Studios 'Large Merry Christmas' die. All one prize, which I won't be splitting. And now the Playground Toy Box is totally minus any Christmas prizes - hooray!


As always, the Snippets Challenge will run for two weeks and the Playground gates will close at 11am UK time on Saturday 25th January. The gates will open again at midnight UK time on the same day.

Don't forget to check in next Sunday to see the names of the winners in the Grand Draw which ran over Christmas and New Year. I intend to do the draw during this coming week - and have already printed off slips with your names on for Dudley's 'pick and mix' ............. from a clean doggie bowl :) Already trimmed into little strips, they just need to be folded and away we go!

No photo of Dudley once again this time round - he's been a little treasure this week, so affectionate and yet gentle at the same time. Almost as if he knows! Having said that, we've been going to bed pretty early (so I can rest this shoulder now that I can sleep reasonably comfortably again) and the little monkey was up doing what sounded like a 'sand dance' from around 3am this morning. No sooner did he settle down then off he went again! Of course, when Len got up for archery at silly o'clock - Dudley curled up and went back to sleep for a couple of hours! It reminds me so much of when he was a little puppy and we both were tottering around feeling as if we were undergoing torture by sleep deprivation!

Lots of love from us all - Parsnip, Dudley (woof, woof!) and of course me,