Today is the final prize in the Grand Draw - and this is the sample card I made: 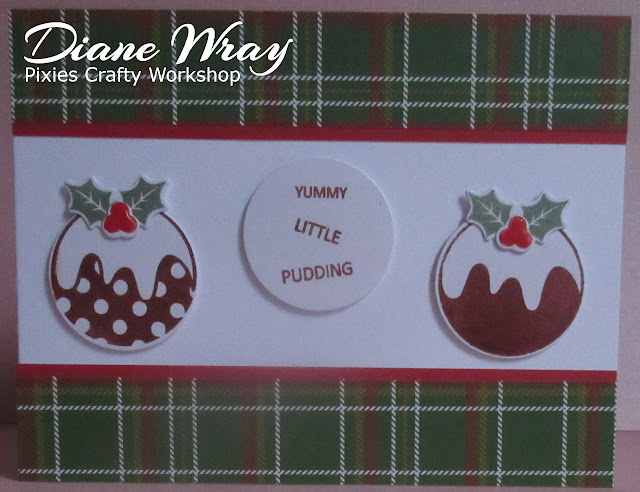 - then stamped the 'yummy little pudding' words using the 'Coffee Bean' ink pad again - took the risk and just eyeballed it so I could use the pudding die to cut it out, and it worked out fine

- then added the strips to the top and bottom of the image panel using a tape runner again and trimmed off the excess at both edges, from the back

- finally, popped the two puddings and the sentiment in place using thin sticky pads and I chose to add the puddings lower than the sentiment, partly to balance it out and partly as I didn't trust myself to get all three absolutely level - at least I give you the warts and all background!

The set includes three smaller puddings and I just thought, whilst typing this, one pudding on its own, flanked by capital letters (stamped or die cut) could spell out the word JOY for a rather different Christmas card. I have some letter dies that that I think could work quite well. Watch this space :)

And today's prize is another one where there are three chances to win: 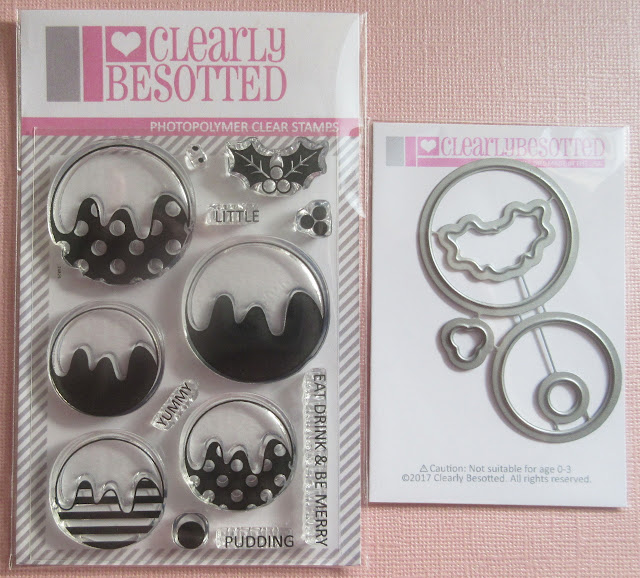 A Clearly Besotted set of stamps with matching dies called 'Christmas Pudding'. I wasn't too sure about them once I'd bought them, a while ago now - but they're good fun to use and make for some pretty quick and funky cards.

I've said previously that Clearly Besotted have some cracking clearance deals fairly regularly - in fact, I've just nipped in and ordered a couple of future prizes as the Playground toy box is getting a bit low now that all the Christmas stuff is out of it. So, I make no apologies for the frequency in which they've appeared in this draw - and will continue to appear in future challenges. Disclaimer, I have no connection with Clearly Besotted - my only connection is that I buy from them and at one point they did give me a gift voucher to offer as a prize to you lovely ladies. I got their written gratitude for showcasing their products - which is all I ever want. They're a small company, basically run by two sisters with a lovely lady who does the dispatching side of things - and I like to support small businesses when I can. Plus, they do make wonderful stamps and die sets! Regarding the clearance deals, keep an eye on them if you're interested as, if you like matching dies, those seem to run out first.

Commenting for all prizes will also be turned off at 11am on Saturday 4th January to coincide with the draw closing.

I just added up and there are 18 prizes in this draw (some are three chances to win the same thing, mostly Clearly Besotted needless to say). So that's pretty good odds I think!

We were really lucky on New Year's Eve, no fireworks nearby to speak of (after the first burst at 6pm) and Dudley was fine all evening. We did pop his onesie on just in case though, towards midnight, as a precaution.

And, even better news is that we've now gone 36 hours without the RCD tripping out the power sockets. By the process of elimination we're as sure as can be that it's some outside lighting in the front garden (post lamps on the garden walls). And, it can be sorted out apparently - Len is on the case! We are a bit concerned that all this wet weather will have played a part so Len is going to change the lamp bulbs for low wattage and use a transformer where they plug into in the garage. Ha, the last thing we need is some local nosy eedjit to get an electric shock. So strange, we always thought the guy who installed them when the wall was built as part of the extension about 10 years ago was a bit stupid using an existing ring main power socket instead of adding them into the lighting circuitry - now, we're very glad he actually did that!

Got the giggles here at the thought of some trespassing eedjit - shaking, teeth chattering, hair on end, eyes revolving in their sockets, lighting up the whole street thinking 'Whaaaaat just hit me?'. Snort. Oooer, I do have a bit of an evil streak :)