First of all, it appears that Blogger has been fixed and embedded comments (the default setting) is working fine again without those long delays. I've reverted back to that rather than the pop up box which I didn't find as good in some ways - mainly embedded comments gives me, as well as others, the option to reply to comments within the comment facility. I've done this because I often find follow-on comments and don't want to stop that happening but will keep an eye on things just in case I need to flip back to a pop-up.

How happy I am that Less is More has switched to being a fortnightly challenge - I really do need thinking time for challenges, plus I generally only post on here a couple of times a week (possibly three if necessary) and of course one of those is always taken up with the Snippets Playground.

So, this fortnight's theme over at Less is More is the dreaded one layer plus 'Cute'. And this is my entry: 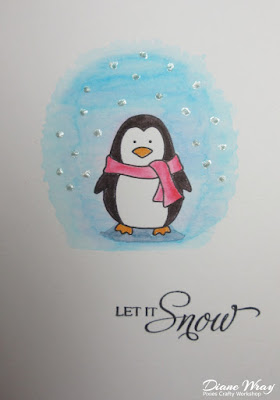 - did a practice run on the graph paper then put the card blank in place and stamped the image and sentiment at the same time. I was lucky that both stamps are exactly the same thickness despite being different brands - mostly it does work out OK but now and then the stamps will differ in thickness (ask me how I know this!)

- out came the Ziggies and I did a very rough background using a couple of shades of blue and a water brush - somehow, the shape evolved into a bit of a domed shaker, not that I set out to do that!

- then coloured the little penguin, again using my Ziggies

One thing I learned whilst making this card is to do the 'flick to flatten' technique to get rid of any 'Hershey pointed tips' on the white dots of Liquid Pearls.

Another thing is those Post-It notes I mentioned. They're sticky all over the back (apart from a strip which is left clear at one edge with rounded corners to make removal and separating them easier). Jennifer McGuire uses them a LOT for masking and I'd been hunting on line for them in the UK for ages. I finally found some on Amazon UK a few weeks ago - hooray! They're known as 'Super Sticky Full Adhesive' and I bought the 50.8mm size. I instantly lost a few pads to my 'in-house critic'as for normal use they're much better than the single stripe of sticky style. Then, when working on this card, I found that 2" x 2" or so size could be cutting it a bit fine for bigger images - so I've just ordered more in 76mm x76mm size which is approx. 3" x 3" of course - link to Amazon UK is HERE. I've used various ways of masking images and this seems to be the cheapest and (for me) most accurate. My attempts at using masking fluid weren't as successful for small chaps like this penguin :)

But, a little word of slight warning. I almost came a cropper when doing the blue Ziggie background using a waterbrush! The colour from the bright pink Post-It made a bid for freedom - I had to make sure I worked towards the mask rather than away from it and Little Master Penguin does have a faint pink 'halo' in parts! Having said that, I was sloshing a fair amount of water around and, for the most part, will be using the Post-Its to create layers of stamped images. I do have some masking film which I'm sooo mean with as it cost a lot of money at the time!

And finally, just to finish off this marathon post, I was working away in the craft room ready to add the little white Liquid Pearls dots and Len glanced in on his way to the bathroom. There was a shout of 'Good grief, that's like a whole chemist's shop you've got there on your desk. And I dread to think what else is hidden in those cupboards!' Oooopsie: 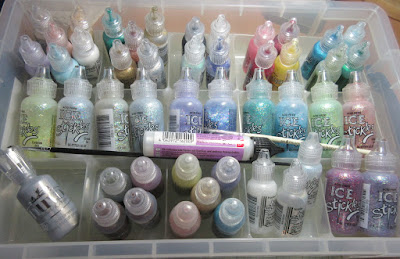 I really can't imagine what he means, a girl needs choices, snigger 😀