Well folks, we're finally back into the usual fortnightly routine in the Snippets Playground. All of the sand erasers and also the grand Christmas Draw prizes have been sent on their way...........although Maxine hasn't claimed hers as yet. I'll give it another week and then redraw for it if I don't hear anything. Just hope all is OK with the weird weather we've been having and flu germs flying all over the place etc.

My snippets card for this fortnight came about when Tara, of Seven Hills Crafts, very kindly donated a cute stamp set for the Playground. It popped up unexpectedly in an order a little while before Christmas and I wanted to share it with you as soon as possible. There was a duplicate set of stamps for me to play with as well - and this is what I made: 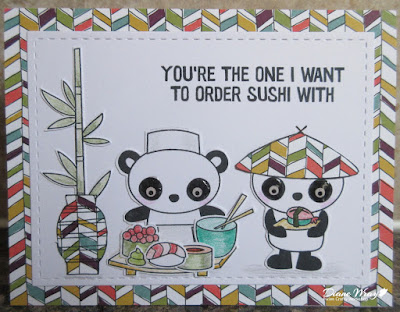 - a snippet of patterned paper glued on to cover the whole of the card front. I was hunting for something Japanese in style but found this instead, which contained all the colours I wanted to use for the little images and a spot of paper piecing

- used Memento 'Tuxedo Black' ink to stamp a real selection of little images onto another snippet of white card and also a piece of the patterned paper (the hat and vase - for paper piecing). The Misti was invaluable for getting nice solid black patches on the little pandas - and the cute set of stamps is by MFT - called 'Sushi Date'

- ha, then the fun began! I spent a happy couple of hours carefully cutting around all the images by hand, leaving narrow white borders and popping them into a little plastic container as I went for fear of losing any of them

- then added each main piece to the stitched edge rectangle of white card I'd cut earlier, to build up the scene

- the little die cut hat comes with the V shape finishing off the top. I dealt with that by placing the paper piecing hat where I wanted it to be on the bear's head (poor little thing, I had to give the ears a bit of a trim!) and then placing it on the card front and lightly drawing a pencil mark around the top of the hat's intended position. That meant I had a guide to use a fine line black pen to draw the V shape before erasing the pencil line and then popping the 'hatted bear' in place

- at that point I took the risky step of stamping the sentiment with a lot of the scene already in place. The reason I felt confident enough was because of using the Misti plus the fact that MFT stamps always work so well giving a clean, crisp result. Also, I did a little trial run on a spare piece of card - as well as using an acetate grid to position the sentiment in the first place :) It's called the 'belt, braces and double knicker elastic' technique

- then I glued the white rectangle 'scene' to the patterned card front and added all the other bits and pieces of food - right down to the little green whirl of wasabi!

This is such a cute set of stamps, and a total delight to work with - although I was a bit daunted before I got going I'll admit! There are dies to match this stamp set apparently, but they aren't essential as there are no really awkward bits to hand trim. I do buy matching dies but it's generally only when I feel that the images really would be too tricky to trim.

And a huge thank you to Tara for offering this lovely prize - some of the sentiments are 'raw-some' indeed - I've increased the size of the photo so you can see them easily)! A perfect stamps set for anyone who likes sushi - or even just the clever play on words in the sentiments.

I love to look at sushi (perfect little works of art really) and in Terminal 3 at Heathrow Airport there's a sushi bar (called Yo! I think) with a selection of ready portioned and quite delicious looking things to pick which  roll past the seated diners on a circular conveyor belt. All neatly enclosed in clear domed dishes (sushi, not the diners - silly!). But, so far, we haven't ventured to try it - I'm not sure about raw fish somehow.

As I mentioned earlier in this post, Tara and her husband Rick own Seven Hills Crafts - and for us here in the UK it's a real treasure trove of USA craft goodies which we can't usually get our little paws on. Over Christmas and New Year Tara and hubby moved their home and business and it was dreadful not being able to order during that period of time. No wonder I've gone a bit mad since! The Playground toy box is looking quite healthy again, after the big Christmas purge. I just can't help myself, sigh.

BTW. I mentioned sand erasers earlier in this post. I do have a rubberised glue eraser which generally works well but one stubborn little bit came off perfectly with the sand eraser as a last resort! Yay!

As always, the Snippets Challenge will run for two weeks and the Playground gates will close at 11am UK time on Saturday 3rd February. The gates will open again at midnight UK time on the same day.

Be sure to call back next week to see the winners of last fortnight's Lawn Fawn 'Shammy' stamp cleaners. We won't have a guest designer as I just haven't had a chance to contact anyone to ask in plenty of time and this coming week is a busy one for me. Thank you so much to those of you who have offered your services - you're on my little list :) I'll be showing my 'picks' from last fortnight of course.

Remember, it's ScrappyMo's Rudolph Days challenge from the 25th (I might make a snippets card for next Sunday just for Rudolph Day, but with no prize as this one will still be running). You also have a little bit of time to enter Darnell's new 'Twofers' challenge if you're quick!

Love from Parsnip (he's totally back to normal now - whatever THAT is!) and of course from me,