This is the very last prize in the Christmas/New Year giveaway folks - and I'm almost on my knees here after such a flurry of card making, writing posts, keeping track of comments on prizes, visiting your entries etc. But, with a huge sigh of relief and satisfaction, we made it in the end! Even Parsnip keeps whining when I produce yet another prize to offer! He may well ban me from doing this next year - but the show isn't finished just yet.

I did have a smile about my penguin card of yesterday. They sure do have grey fluffy plumage at first - but they apparently also have dark head markings so I was a bit off-beam. Never thought to look through the Google Glasses of course! I just recall seeing little grey fluffy babies on TV nature programmes .......  shouting for their parents to return to them with FOOD!

So, way off the track on penguins, this is my card for today - in fact I made two identical ones at the same time. When you have all the bits for heat embossing lined up it does make sense to do more than one card - especially as this was fairly easy to make: 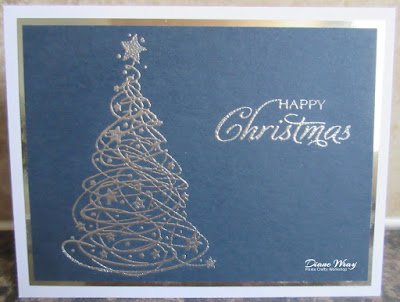 - piece of silver mirri card from the snippets folder, trimmed to leave a white border when afixed to the card front

- snippet of deep navy card stock, cut to slightly smaller than the silver layer so that it would be 'framed' when the card was assembled

-  then I used the navy card in the Misti plus an acetate grid to align the two stamps where I wanted them to go. They're both by Inkylicious, the tree is 'Xmas Tree Swirl Small' and the sentiment is another one from the 'Seasons Greetings set

- once happy with the alignment, I picked the stamps up on the lid of the Misti then removed the navy piece of card, swiped it all over with an anti-static bag and replaced it in the Misti ready for action

- stamped and embossed the tree and sentiment in one go (one benefit of using stamps by the same manufacturer is that they will invariably be the same thickness). I used a Delicata 'Silvery Shimmer' ink pad and Stampendous 'Sterling Silver' embossing powder

Prize H is mostly connected to this card: 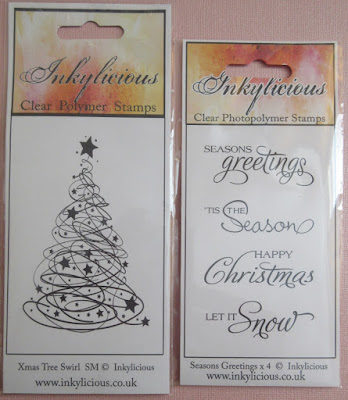 Exactly the same stamps as I used for my card - Inkylicious 'Xmas Tree Swirl Small' and another (total of four sets this year!) Inkylicious 'Seasons Greetings' set of stamps. I've had the tree stamp since just after last Christmas - patiently waiting in the toy box. And, keeping it company for about the same length of time is this: 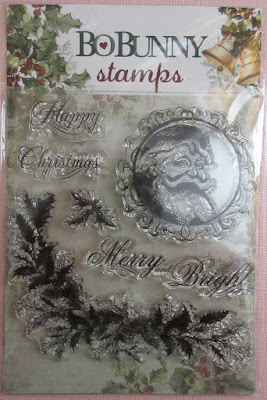 I was sent the set of stamps by a lovely friend for the toy box ages ago and it's also part of today's prize. Dee peeks in here but isn't a blogger ........ yet :) It's a really gorgeous Bo Bunny set called 'Father Christmas' - and it's very traditional. Even just the little sprig of holly would be so useful - although I like the whole set, that Santa is just as I imagined him as a kid. Who said 'imagined' - he was here for a mince pie and glass of sherry for sure, as always, just a couple of weeks ago. Parsnip was peeking!

And that, my little friends, is absolutely the very last Christmas item left in the toy box! And of course, I will split the prize if you only wish to play for part of it.

So, the Playground gates close at 11am tomorrow (Saturday 6th January) and commenting for prizes will also be turned off at the same time ready for us to swing into a fresh Mr Linky at midnight. As well as a bright and fresh new year - remember, there's still time to link up a snippets make HERE.

And do make sure you've added your name if you want to play for a particular prize by leaving a comment on the relevant post from this past fortnight.

I hope you enjoyed playing along, it really may be the last Christmas/New Year mahoosive giveaway as I did find it much more tricky for some reason this year. Might be galloping old age or just that I've been juggling so many options. But - it was still good fun!

Love from Parsnip and me