I was going to leave my entry for Darnell's new 'Twofer' card challenge until my usual Wednesday post. But, that's really very last minute, the cards are made already, and I'd cry if someone comes up with one of my ideas.

We have to use a 'feather' stamp and/or die on two different cards, for two different occasions - and you need a stamped or die cut sentiment to emphasise which occasion the card is for - easy huh?

After much pondering about just how to achieve what I wanted for the Christmas card I found a neglected set of feather stamps lurking here. And away I went with these cards as a result: 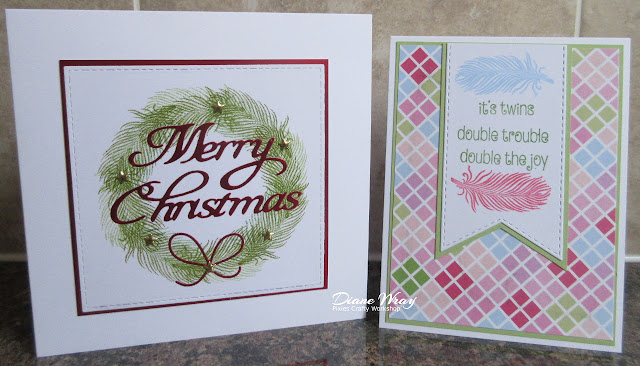 This is the stamp set I used - just the the smallest feather stamp on the bottom right: 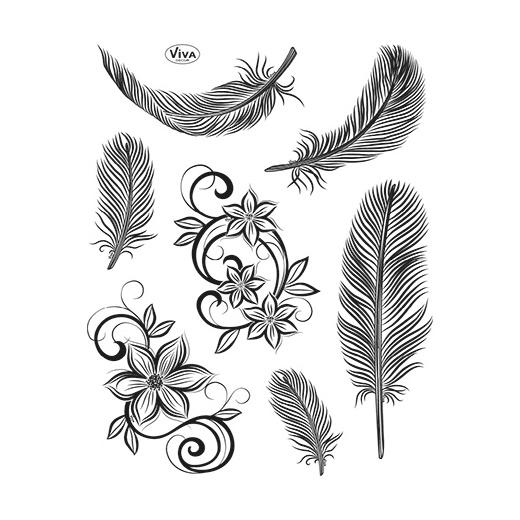 Here are the cards on their own, with how I made them: 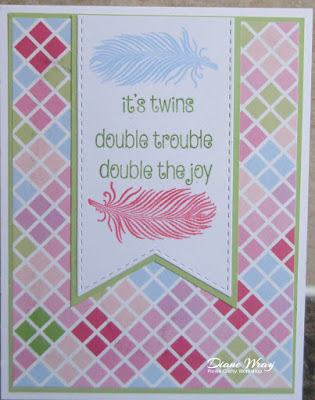 - snippet of SU 'Certainly Celery' card for the backing layer, topped by a piece of paper from the 'Sweet Wishes' paper stack (free with a magazine ages ago) - glued together and set aside

- then stamped the blue and pink feather onto a snippet of white card using a slightly curved feather from the Viva Decor stamp set, which has loads of lovely feathers in. Made in Germany but also available over here in the UK. The inks for the feather are Memento 'Summer Sky' and VersaMagic 'Pink Petunia' - chosen to match the patterned paper

- next, stamped the sentiment using stamps from the 'Hot Stuff' stamp set made by Clearly Besotted and SU 'Wild Wasabi' ink pad

- glued the two layers together, trimmed the top and added it to the layered green and patterned paper before then gluing them to the card front

Loved making this card, lining up the patterned paper was a challenge - and there's no way I could have stamped the sentiment without the Misti!

I thought about Darnell and her lovely little (not so little now) twin grandsons whilst making this - even though the card is for a 'one of each variety' :)

My Christmas card is next, and that's the one I'm really happy with as I stretched the Misti a little bit further. I've never seen this done before but someone will already have 'sussed' it I'm certain: 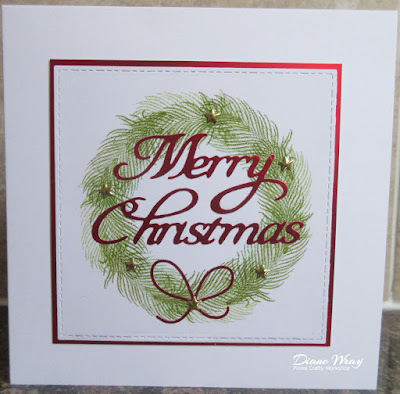 - then placed the 'softly curled' feather stamp in place at 12 o'clock on the pencilled circle. A slightly curled or curved feather is likely to work best for this technique

- to be honest, at this point I could already see enough about where this was going so I carefully erased the pencilled circle and 'winged it'

- leaving the stamp in place, I rotated the piece of card by 90 degrees to the left, inked up the stamp again and stamped another feather. I did this twice more for the other two stampings, rotating by 90 degrees each time (I went to the left but either way would work I'm sure)

- let's stick with the clock face descriptions (sheesh photos would be easier but all the photo editing is crazy!)

- next I cleaned the stamp using my Shammy and placed it onto the card in the Misti, at 11 o'clock this time, so it was overlapping the first feather by about half and also following the curve in my mind. One could argue that I have a VERY curved mind to be honest!

- stamped the feather four times, as before, this time using SU's 'Wild Wasabi' ink and of course rotating the card by 90 degrees each time

- last of the stamping was to clean the stamp and replace it at 10 o'clock on the happily forming circle. Then stamped as before, four times using SU's 'Old Olive' ink and rotating the piece of card by 90 degrees each time - so the circle was complete

- and there we have it, one feather wreath, all thanks to the Misti

- I die cut the wreath panel using a die from the 'Stitched Squares' set by The Works, and mounted it onto a slightly larger square of red satin mirri card

- using more of the snippet of red satin mirri card, I backed it with Stick-It and die cut a sentiment using the Presscut 'Merry Christmas' die and a bow using one of the Memory Box 'Crisp Bows' dies

- glued the panel in place on the card front

I think this could work well using gold/ silver stamping inks as well - of course, if you're really wanting to 'sit and peel grapes' then you could possibly emboss each set of four feathers as you go.

I did read a few folks saying how much fun they had being able to use stuff for both cards whilst it was all out on the desk. The only thing I used more than once was the feather stamp - and I guess the Misti, guillotine and die cutting machine!

It was fun to play and after such a long absence I did spot my mojo peeking round the corner of the craft room door - almost ready to return!

Thanks Darnell for the swift kick in the rear end! I hope to be back to play again - once I recover from this first marathon! 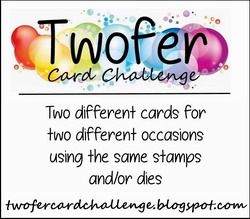