Yet another Christmassy 'Snippets Playground Celebration' prize - and it's a bit of a bumper bundle again: 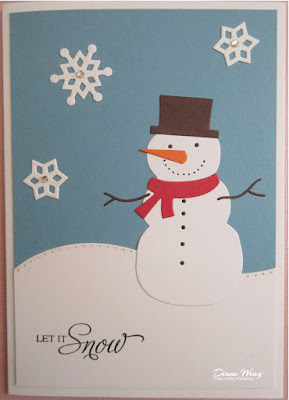 - first I rummaged around in my snippets folder for all the coloured snippets, and used half another white card blank from the same line so that all the whites would be exactly the same shade (I often do this, must be the OCD in me!)

- my tip when making a hill and background as I've done is to make the whole thing bigger than you want the end result to be. First I die cut the white hill using a Spellbinders Borderabilities 'A2 Curved Borders' die with a pricked edge and used a mini tape runner to attach it to a piece of medium blue card

- then I trimmed the panel down to suit and glued it onto the card front - no worrying about the 'hill' lining up with the blue background!

- stamped the sentiment using the Misti, Memento 'Tuxedo Black' ink and a stamp from the Inkylicious 'Seasons Greetings' stamp set

- then the fun part, I built the snowman and added the three snowflakes

- the trickiest bit was adding the teensy little black eyes and 'buttons' (which are also die cut from black card) - but we got there once he stopped wriggling and squealing that I was tickling him!

- next, I used a black fine line marker to add his mouth (the die imprints little dotted indentations which makes it so much easier)

We send a lot of cards to families with children so I'll be making a few more of these for sure. One way I just thought of to get round the tiny little eyes and buttons on the snowman would be to back the die cut holes with black card - one strip going down for the buttons and then a small one across the back of his eyes - before sticking the snowman to the front panel. Ain't hindsight marvellous!

And so, this is today's prize: 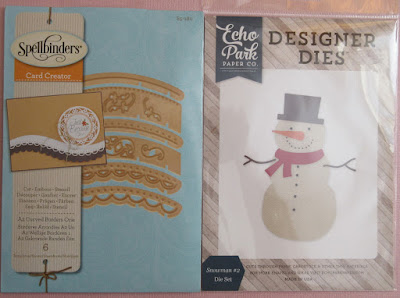 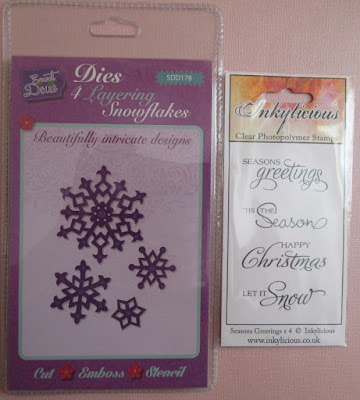 It's the same as I used for my snowman card, apart from the little gems and clear Wink of Stella. Our postal service is getting very twitchy about sending any liquids in the mail - even within the UK - so unfortunately anything 'runny' can't be offered as a prize these days. So, you could be playing for a Spellbinders Borderabilities 'A2 Curved Borders' die set, an Echo Park 'Snowman #2' set of dies, a Sweet Dixie '4 Layering Snowflakes' set of dies and of course yet another of those Inkylicious 'Seasons Greetings' stamp sets

As I've previously said, I will split the prize if you don't want to play for all of it as a single bundle. Just state your preference in a comment and I'll take that into account when the time comes.

I've spotted a couple of 'yes pleases' where folk haven't linked a snippets make as yet. They may be busy right now (as there are still a few days to go until entries close down) but I suspect that they may not understand that you must add a snippets make to Mr Linky. Mr Linky is pivotal as I use him to choose the winning numbers of course.