My snippets card for this fortnight was made with Len in mind - although I've since come up with a different idea! That's what happens when you make cards too long in advance, as well as Mr Mojo having made a return visit or three!

I spotted the die I used on this card over at the Seven Hills Craft blog and thought it was perfect for either Valentine's Day, Anniversaries or 'just because'. It looks such a simple card but Dumbo here decided that it would be even better to inlay the words - hey, ho, kept me busy for almost an entire day: 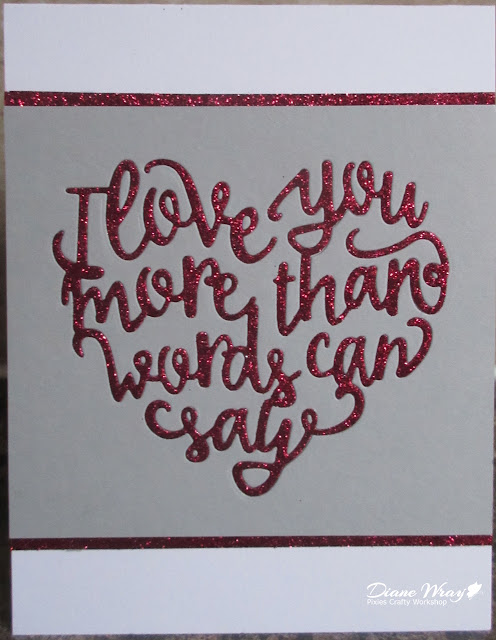 - then I die cut the red glitter words using the Lil'Inkers 'Love You More Than Words' die and set them to one side. As Lynne in NI picked up, I always pop little pieces into a plastic lid when I'm working to stop them from escaping. Mine just so happens to be a clear lid from one of those small double layer boxes of Ferrero Rocher choccies (my very favourite - yummy)

-  next I worked out the size I wanted a SU 'Smoky Slate' (aka grey!) panel to be and trimmed it to size - another snippet gone

- while I was using the trimmer I cut a narrow snippet strip of the XCut red Glitter paper across the middle (and positioned it on the card front so that just a little strip would peep from underneath the top and bottom of the Smoky Slate panel (this is a real cost saver when using precious card or paper for backing purposes. Saves on making a full square or rectangular mat and still gives a pop of contrast (in this case I could have used the centre of a square of the glitter card of course to cut the die and then used the outside 'frame for matting

- die cut the words again from the grey card and removed the die cut very carefully from the die itself as I wanted to use a lot of pieces to fill in between the red glitter words. Most of the teeny grey pieces that are in the centre of total loops stayed in place in the die cut thankfully

- then it was time to add all the teeny little grey infill pieces, which took ages! The easiest way is to position the grey die cut bit by bit on top of the red glitter one and gently poke out the tiny infills. You then feel them lock down into place

- final step, at last, was to adhere the grey panel on top of the two red glitter strips. I wasn't totally sure about what would happen if glue didn't hold the top and bottom firmly or even worse squeezed out onto the red glitter layer

- I could have taken the time to experiment with some tiny scraps from the waste bin but that possibility of 'glue ooze' was still bugging me so I tried another of my little tricks - which worked like a charm!

- I flipped the grey panel face down on the desk, and left the adhesive sheet backing behind the die cuts in place as that stuff is so unforgiving if you get things wrong when placing layers together - hence my love of wet glue or Stick-It sheets

- then I ran a strip of red line tape across the top and the bottom of the panel, leaving the protective red plastic in place

- next filled in the rest of the back of the panel with Collall All Purpose Glue before flipping it back over and carefully positioning it, centred between those red strips

- then straight away I gently lifted corners at one side of the top and bottom of the grey panel, slipped my very pointed tweezers in and peeled away the red line tape covering so that the sticky could adhere to the red glitter paper. Perfect!

I do often use a similar trick with red line tape so it wasn't a totally idea to be honest, more of a way to avoid any messy glue ooze. Normally that can be removed with a glue eraser or even the sand eraser but I just wasn't sure how it would work on glitter - plus it's stuck there like a limpet now with no chance of peeling back!

To be honest, I made a rod for my own back by inlaying the die cut - even though the results were so worthwhile. I could have just stuck the die cut straight onto the grey panel by cutting the heart shaped words straight from the adhesive glitter paper without even backing them with card as well as eliminating all that fussy poking out of teensy little pieces. The glitter paper holds its shape really well even when die cut finely - unlike the way that peel offs tend to distort. Also, and this may have been a trigger for me doing an inlay - the die cuts in two pieces. If you look closely you'll spot that the words 'you than' come out separately to the rest, But, on hindsight I don't think that's enough of an issue to make me spend such a long time messing around inlaying this particular die cut in future :) It's a Lil'Inkers 'Love You More Than Words' die and also a pack of 10 sheets of that luscious XCut Self Adhesive glitter paper - both the same as I used for my card of course. The glitter papers are red, lime green, cerise, purple and a beautiful peacock blue - and totally non-shedding as well.

There is a caveat on the prize, which will apply from now on. Both items form the one prize and I won't be splitting future prizes unless I decide that it's really got to be an option, which is extremely unlikely. These babies go together - of course, if you win you can always pass what you might not want onto a friend once the package arrives with you. So you play for the complete prize and I post off just one package to the winner. It also means I only need to keep one list of prize players with no options of course - keeping this as slick as possible girls!

Be sure to call back next week to see a really lovely Guest Designer, my picks of last fortnight's entries and also the winner of the MFT 'Sushi Date' set of stamps.