LOTV to the rescue!

My Christmas card target for 2018 had already begun to slip so a while ago I rustled up four cards, all the same, using pre-printed LOTV images to catch up: 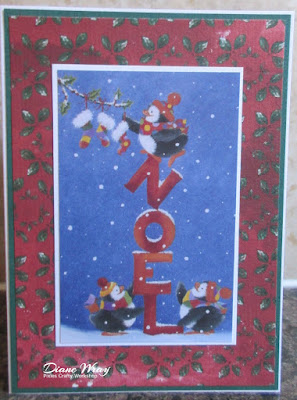 - very old white linen A6 card stock, trimmed down to 4" x 5.5" (partly to be able to balance the trimmed images but mostly as one corner had become very slightly dog-eared)

- Magnolia 'Sweet Christmas Dreams' patterned paper from the Lingonberry Collection, trimmed to slightly smaller than the dark green layer and then both were glued to the card front

- the LOTV 'toppers' came from one of their Art Pads called 'Penguin Pals', trimmed down to suit then mounted on a slightly bigger piece of white linen card stock

These were so easy to make, just a question of rummaging a bit through some boxes and boxes of older craft goodies and then a lot of trimming and gluing. It's a good way to produce cards when you don't feel in the mood to spend ages colouring or die cutting.

My guess is that the images are no longer available from LOTV - unless they're in digital format. The Magnolia backing paper is almost certainly now defunct (it dates back to when I used to order goodies and 12" square sheets of patterned paper from Craft Creations in the early days of my card making). And the white linen card blanks also date back to that era.

The foray into older goodies did prick my conscience and make me realise that very soon I need to have a real purge in here! It's likely to be a huge task so it'll be the 'eating an elephant' approach I suspect - 'just a bit at a time'. 😅