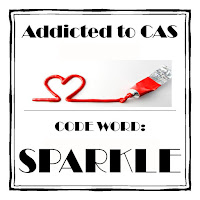 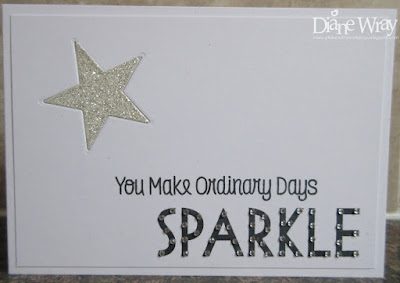 A really crisp and elegant card Di and it's a lovely sentiment.

Afraid I've not been out to play this week again, my backs in sympathy with yours I think so having more dorsal root injections. So crafting's been restricted to must do's, but soon as I get going properly promise I will do better.

A fabulous card - I love your inlaid star and that great sentiment stamp.
Kath x

I love your sparkly star Di and the perfect sentiment and such pretty clear gems on it too. x

Oh no! No, no, noo! I have to have that stamp set and die - that is a beyond gorgeous card Di - love it. I will have to see if I can persuade OH to purchase a a new stamp set and dies for me that is so up my street! I am experimenting with CAS on my cards right now and I've fallen in love with these! Hope you have a fabulous weekend Karen xx

You are a star.

Love this technique and your CAS is very elegant. The SPARLE word with the gems is just fabulous! Great idea!

Thrilled to see you've linked up at ATCAS this week Di. Your card is simply CAS perfect and full of bling and sparkle! Just stunning. thanks so much Sarah x

So clean design! Love clear gems on SPARKLE, looks like neon billboard. Thank you very much for sharing with us at ATCAS. - Ksenija, ATCAS DT

The inlaid sparkly star takes the spotlight, but I do like that big, bold sentiment with the tiny bling too! Nice card!

How simple and stylish it looks Diane
Cheers
Dr Sonia

Happy is an understatement I'm ecstatic here! Thanks so much girls. Love your card Di you could enter in our Penny Black & more challenge. Great picks too x

Such a lovely CAS design...Love your sparkly inlaid star and your sentiment is perfect! Thanks so much for playing along with us this week at Addicted to CAS!