I made a really quick card  and, in truth, the beautiful papers did most of the work: 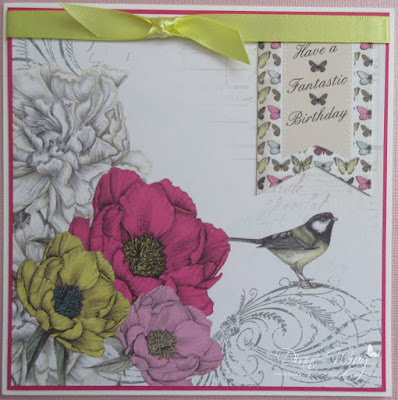 - patterned paper from the 'Botanica' Collection by Craftwork Cards, trimmed to size and adhered onto the Melon Mambo card square. Thankfully I tried Collall glue with a teeny piece of white card and a snippet of the patterned paper - sure enough, the glue was going to show through so I had to resort to a Stix2 tape runner

- the banner is from the same paper set, adhered with same tape runner onto a snippet of white card for rigidity before being trimmed to shape with scissors and stuck onto the top part of the front panel

- final touch, little piece of lemony yellow ribbon tied in a knot around the strip of ribbon - and held in place with a little piece of red line strong adhesive tape behind the knot

Gosh, so pleased I tested the reaction of the Collall wet glue before potentially ruining the whole panel. What alerted me was that the paper is matt and not overly thick and therefore was likely to be pretty absorbent - lesson to remember there.

I'd spotted this wonderful paper over at another blogger's and raved about it. A sweet blogging buddy immediately sent me her own pack, which had apparently been a magazine freebie. Too sweet - mwah, and thank you again!!

Yesterday we had the front garden borders tidied up, dramatically thinned out and mulched ready for the onset of Winter. The gardener found what seems to be a hedgehog nest (underneath a huge strappy leaved plant we'd got him to cut right down so it would regenerate) so great care was taken not to wake 'snoozing Spike' and he's now had an extra layer of bark mulch carefully added on top of his home - even left his little doorway clear for him to come and go! We think it's just a Summer sleeping place, they usually make more substantial nests for hibernation.

Having tiptoed round we decided against trying to take a photo, but he'd obviously gathered loads of fallen leaves over a period of time :) Edit - he was back around midnight foraging in the back garden and feeding and drinking at his little restaurant, so at least we didn't chase him away - or it could even be a nest from last year. Oh, and there sure are two of them visiting each night, often jostling for position at the feeding station :)

So, you never know who's sleeping just where round here!