Well, that one snuck up a bit, although a couple of you did already spot that this would be Week 200 in the Snippets Playground!

Celebrations are in order I think - but first here's my snippets card and a perfect excuse to use pink: 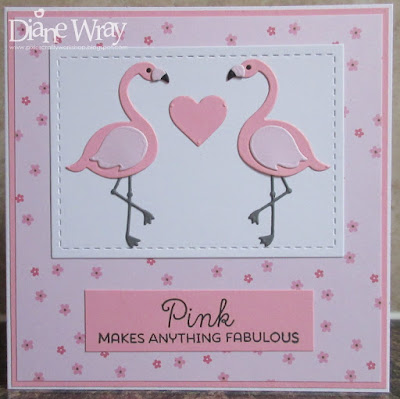 - quite a few pink snippets, starting with a largish one as a 'frame'

- topped that with a snippet of pink flowered card from First Edition's 'Sweet Owl' paper pad - next I die cut the flamingos and the heart using the fabulous 'Flamingos' die set by MFT, and a few little snippets of pink, grey and black card (all backed with Stick-It adhesive sheet)

- at that stage I could work out which sized Lil' Inkers 'Stitched Rectangle' die would work best so I then die cut a rectangle and placed the adorable flamingos where I wanted them to be, with a pink heart (which also come with the die set) in between

- then came the sentiment and I used Memento 'Tuxedo Black' ink and a sentiment from the super co-ordinating stamps set by MFT called 'Tickled Pink'. Stamped onto a snippet of pink card and just trimmed to size

I love, love, love this co-ordinating die and stamps set, huge fun to make up the flamingos and  there are so many terrific sentiments to choose from I had to ask my 'in-house critic' to pick one! Needless to say I did look on line for hints about how to assemble the flamingos and had a right old giggle when I spotted that a few folk had accidentally switched the pairs of legs over so that the feet on the ground were facing backwards :)

Right, no hanging about, straight onto the picks from this last week, and it's been one of the most difficult weeks to choose just a few. Eve rightly commented that she didn't envy me, having seen to many absolutely fabulous snippets makes that you brought to show. Anyhow, here's just a few, do try and hop over to last week's other entries for a peek - some stunners there! 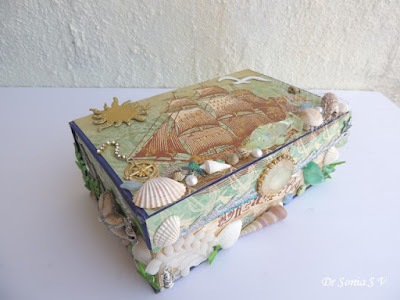 This is one of those makes that totally rocks you on your heels - Sonia made this utterly fabulous box and the detail is just stunning! My top pick of the week for sure! It's all beautifully photographed and explained in her blog post so I do hope you'll nip over for a closer peek! 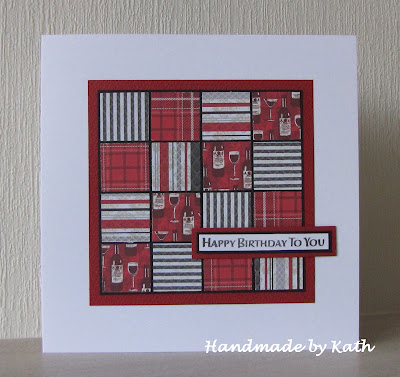 I picked this terrific card, made by Kath, because it serves as a great reminder never to underestimate just how effective patchwork squares from snippets can be. 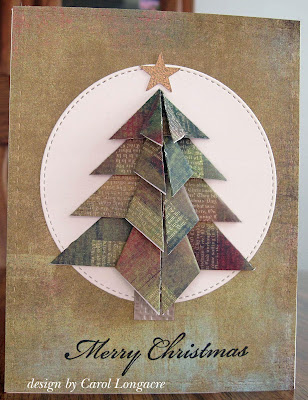 And here's another great use of snippets, made by Carol L , an Origami Christmas tree! What beautiful colours, and it's made from just four squares of snippets paper.

I'm so taken with this idea I did a little search on the internet and came up with THIS tutorial, dating back to 2008 - so where have I been all that time to have missed such a great idea? Thanks Carol for the inspiration and thanks to LeeAnn for posting the tutorial all that time ago! 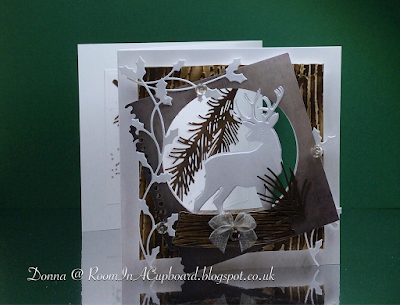 This is a super Christmas card with loads of detail, made by Donna. You truly should hop over for a look, the inside is absolutely beautiful as well! 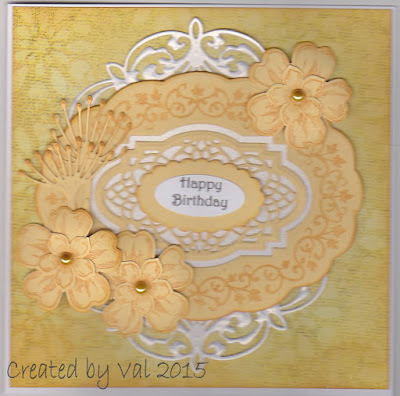 Val was first into the Playground this week, and I immediately picked this card for my 'possibles' list (which can be well into the teens before I have to weed it down on Saturday mornings when writing this post). It's so pretty and I love the combination of dies and flowers with that beautiful apricot  - fabulous! 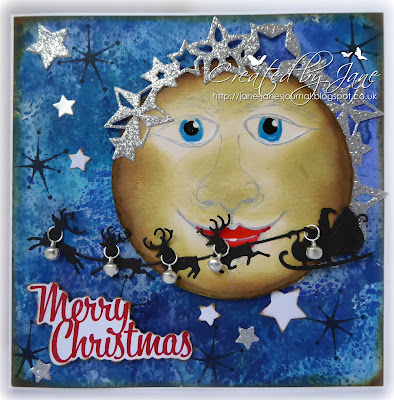 Jane J created a brilliant Christmas card - and she drew the Man in the Moon herself, how clever is that then? Plenty of snippets used too - great work Jane! 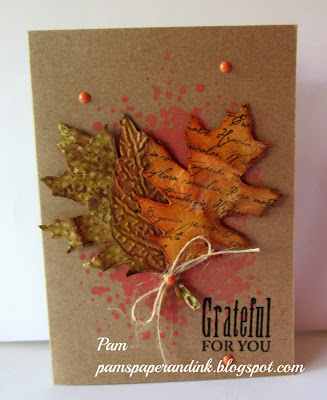 Autumn is well and truly here now, and this fabulous card made by Pam sums it up so perfectly! LOVE, love this card with those wonderful leaves! 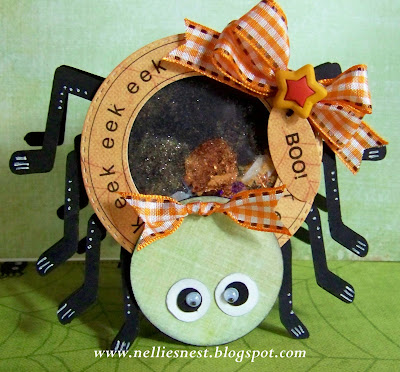 And as we're into the run-up to Halloween, I thought I'd finish with this brilliant shaker card, made by Diane H. Apparently the spider is a she - how silly of me, of course it's the gingham bows that are such a give away :) Too cute for words!

That's eight picks and I could keep on going with a load more but the ironing is leering at me from the utility room, sigh :(

Time for the draw for the Presscut 'Step Card Cutting' set of dies - loads of you were keen to win this set! Yet another time when I wished I had a good few of them to give away but there could only be one winner:

Maura
Oh, that's really lovely. Maura has been playing along with us since mid-June and this is her first win. I'm sure lots of you will have spotted that she's often on the weekly picks list, so I'm sure you'll all be really happy that Mr Random chose her! Maura, can you please let me have your address so I can post the die set off to you (di_wray@hotmail.com). Thanks, and well done!

By the way, if you live in the UK and desperately want this die set I'm sure that Icon UK is the cheapest around. I buy most of my dies from them!

Onto the prize for this next week - and of course it's your own set of MFT 'Flamingo' dies and the co-ordinating 'Tickled Pink' set of sentiments, aka Prize A - one of these is on offer, as a co-ordinating pair. It would be unfair to split them up - they're used to one another by now :) 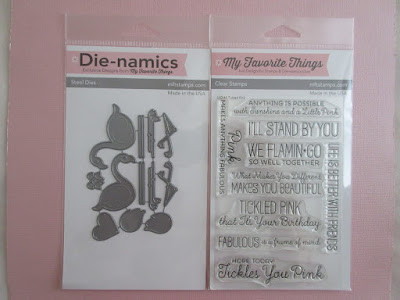 The Snippets Challenge will run for one week and the Playground gates will close at 11am UK time on Saturday 31st October. The gates will open again at midnight UK time on the same day, while the witches are still on the prowl :)

Maximum of three entries and please also link back to the Playground in your blog post to be eligible for the draw. As always, I only include folk who say a positive 'yes' for the prize in a comment. In the past I sometimes had to do redraws after publishing winners so decided this was easier. Plus, some weeks the prize is made up of different items, some of which folk may or may not want.


I really couldn't let our 200th week go by without something special so I'm ALSO offering two Sizzix stamp and die sets. One is a Tim Holtz Alterations set called 'Holiday Joy': 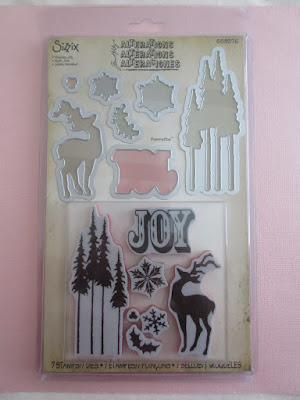 And the other one is called 'Ornaments #3' (but it's not a Tim Holtz one). 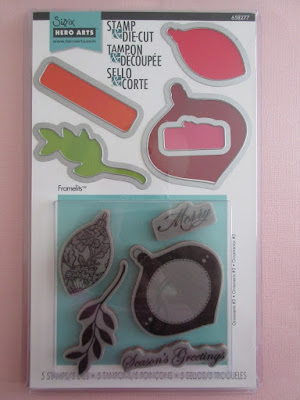 I have to confess that I bought these sets in a brilliant Sizzix sale a good while ago and it means there's actually three prizes in total if you include the MFT Flamingos - and that means more chances to win! There are no special conditions this time, such as entering over a two week period - all the prizes, jelly, ice cream and cake will be on offer during a week long party this week!

In a nutshell, you can say 'yes please' to all three of the different sets of stamps and dies or you can pick just one or two .......... or none of course! I'll do the draw for A, then B and then C.

Have a great week and I hope you find time to join in the celebrations - I did hear whispers of pumpkin carving behind the bike sheds too! No prizes for guessing WHO started that little lot off :)

Today is the 600th Anniversary of The Battle of Agincourt and Len is off to an archery event at his club ............ dressed like this and taking his longbow in the spirit of the day where they'll be shooting from afar at a target different to the normal bullseye ring ones -  I can't even see it in the distance! 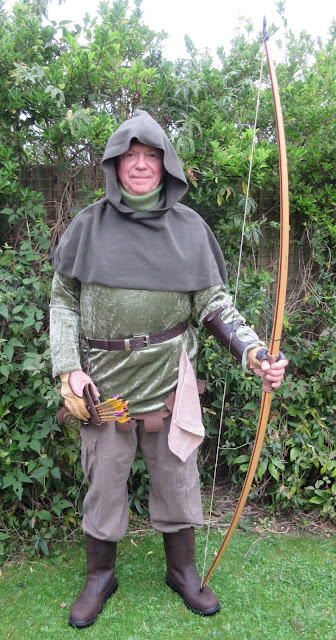 He had a 'dress rehearsal' here yesterday, so I grabbed the camera and chased him out into the garden for a photo call :) The hood does fold down and there's a cosy little knitted cap on his head underneath there - so at least he'll have a fighting chance of seeing where he's aiming!

Hope you remembered to change your clocks? And do remember that it's Rudolph Day over at ScrappyMo's - it runs from today until the end of the month. A good time to combine your Christmas card with snippets :)