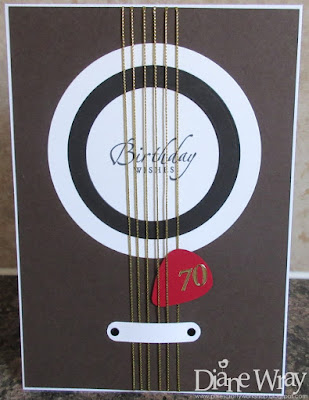 Oh wow... This card is so cleverly designed and put together. I love everything about it. Fabulous CASEing, Di :)

This is a fantastic card for the guitar player! Very clever! Hope Len had a wonderful birthday. Sorry I've been absent. Busy time.

This is brilliant Di..a perfect guitar. Did Len play you a tune on it :-) Hugs xx

What a clever design Di, a really inspirational piece of artwork. Would be a good ides to pinch for my hubby, he also has a guitar or two.

That's brilliant. I love it. Barbxx

This is gorgeous Di and I love this close up view of the guitar and great idea to use the gold cord for the strings and cut a plectrum shape for the number and tucked through the strings too. Thank you for giving my guitar card a mention. Apparently one of the knobs came loose in the post on the way to Australia but our son still loved it, and I'm sure Len was really delighted to receive this beauty also. x

That is such a brilliant card! I love it. What a perfect card for a guitar enthusiast. Happy Back to the Future day! Take care Zo xx

I've seen some of the more complex instructions for guitar cards, but I'm struck by the simplicity of this one. Well done.

Wow..what a creative and VERY cool idea..love it!

To return the compliment - you are one very clever little sausage to come up with this card :) I absolutely love your gifted idea and I'm sure the Mister loved the card too!

This is a fantastic card. I'm sure he loved it. The strings look perfect and the pick is great with the number on it. Tell him Happy Belated Birthday from a blogger.

Well it is certainly well tuned in to his hobby and looks like the plectrum is as old as he is, fab touch.Hope you plucked the strings to accompany you singing Happy Birthday.

So in 10 years time he will have to come up with something equally significant to you.

This is great Di. Very clever of you. Len wears it well. I was gonna knock 5 years off! hugs Mrs A.

What a super duper card for Mr Pixie. You made it sound easy too.xx

So funny Kath! Got me grinning here :) xx

Superb card Miss Pixie - funnily enough saw similar recently and added it to one of my boards as it would be great for Mr Crafting Obsessions lol!

Hettie just told me we could do some pumpkin carving Miss Pixie - are we meeting at the back of the bike sheds?! Karen xx