and so it had to be a reindeer on my card for the challenge over at the lovely Sarn's. Grin, but I gave Rudolph a 'Lady Friend' too :) 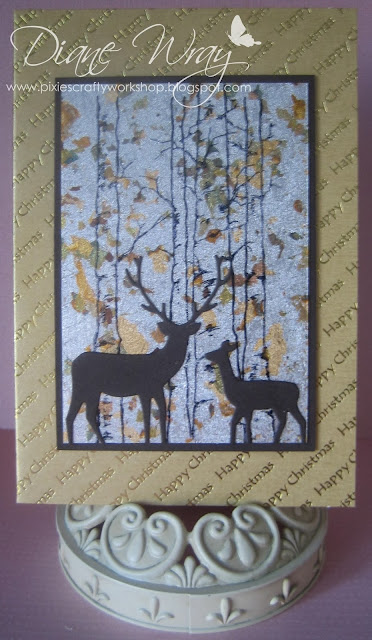 This was my third attempt at a card using the Clarity Stamps 'Birch Trees' stamp - the first two doing resist embossing and then adding a moon and sky went in the bin so in the end I resorted to a technique I haven't used for ages - gilding flakes.

- A6 gold card blank, already with the 'Happy Christmas' wording embossed in gold. Had them ages and in the end they were the best background card I could find here - funny how old goodies can come to the rescue

- then, the stamped image was covered with a piece of acetate - over the already exposed sticky

- the backing was peeled off the self adhesive sheet on the reverse side of the image, and then I covered all that sticky sheet behind the image with 'Winter Dawn' gilding flakes,  by Indigo Blue, rubbed in first with finger and then with an Indigo Blue scoochy sponge

- next, the flakes were covered with more sticky sheet and stuck onto card then trimmed to size before being mounted onto a snippet of SU 'Early Espresso' card

- the deer were die cut, also using a snippet of 'Early Espresso' and popped on with Crafter's Pick Incredibly Tacky Glue. I didn't give 'Rudolph' a red nose though :)

Progress is slow but getting better - although yesterday I sadly cancelled the planned trip to Bath's Christmas market this coming Saturday. Found out that the whole day is scheduled to be 14 hours long and that really was going to be too much, sigh. A tough decision but common sense prevailed in the end. What made it even worse is that I was due to meet up with Sam there :( So, despite feeling a bit relieved that the decision had been made, I felt a bit low here.

THEN, the door bell rang and Mr Interflora handed over these fabulous flowers: 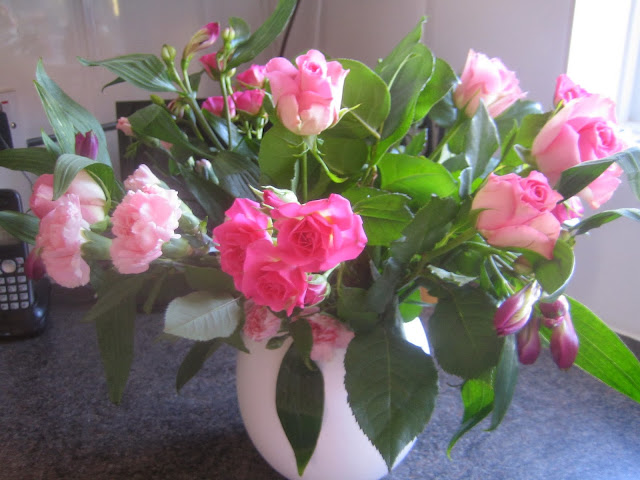 They came complete with vase so I didn't have to go hunting for one - thank you SO much Elizabeth! And yes, the splash of pink did perk me up no end! Mwah!

I'd also like to enter the card into Craftyhazelnut's Christmas Challenge Extra for November.