This seems a bit cheeky as I know it's a very popular dish over in the USA and I bet there are some wonderful recipes used by our Playmates over the pond - but here goes anyhow. 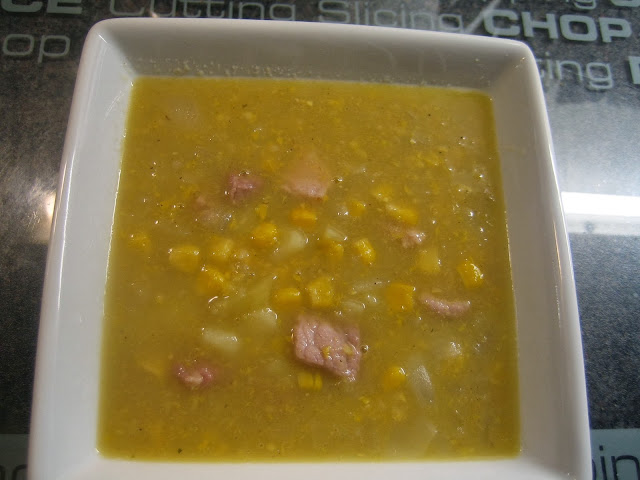 2 tablespoons oil
250g unsmoked bacon chops - I used a gammon steak, no bacon chops to be found - trimmed of all fat and cut into small pieces
1 medium onion, chopped
375g potatoes, peeled and chopped into about half inch cubes
800ml hot chicken stock
325g (or thereabouts) can of sweetcorn, drained

Heat 1 tablespoon oil in a large saucepan and cook the bacon/gammon for 4 minutes, remove and set aside. Add another tablespoon of oil, add the onion and cook until soft. Add the potato and stock, cover and simmer for 15 minutes.

Remove half the mix and set aside with the bacon. Puree the rest of the potato and onion with the stock and half the sweetcorn in a processor.

Season with pepper and return to the pan (and if you used an electric blending stick thingy as I did, wipe away the splatters from the cooker hob, glass splashback, tiled wall, front of apron and even your specs - sigh).

Add the bacon mix and remainder of the sweetcorn, heat thoroughly and serve.

Things I do: served it with fresh crusty bread, ate it and then washed the kitchen floor. Mental note, in future I'll use the food processor rather than go for the so-called easy option.

By the way, it was delicious - the two-legged mouse voted it a hit - after he stopped laughing at the huffing and puffing as I cleaned up the mess!! Mind you, it looked much worse until I realised a lot had hit my specs :)