A Birthday card and some extras about yesterday's card

Whilst piling Len's recent Birthday cards up I was looking for upcycling potential - here's the result of one card I cannibalised: 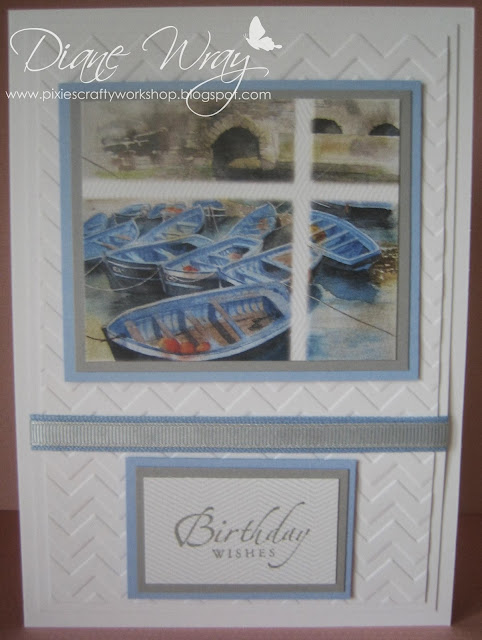 - image from shop bought card, trimmed down then mounted onto SU 'Smoky Slate' grey and then Wedgwood Blue card stock (yay, I found a few more snippets of that lovely blue!). What I loved about the image is the way it was divided up on the original card with faint chevrons behind

- the white backgrounds are one plain white card and then one embossed white panel, using SU's 'Chevron' folder - and then strips of blue and grey ribbon popped across . ...... to hide the join in the embossed panel :)

- the Birthday sentiment is also SU, stamped onto a strip of the faint chevron pattern from the original card using 'Smoky Slate' and mounted onto grey and blue card

I wish I could say this was quick and easy to make. It certainly should have been but every movement was painful here despite sitting with huge cushions to support me back :( And taking the photo from a half bent position was a nightmare.

So, back to yesterday's card - which if you remember was like this: 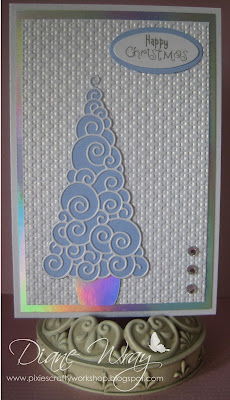 First of all, for Darnell, the blue background was die cut using a solid die which matches the swirly Memory Box 'Winterland' tree - I think it's a fairly recent release: 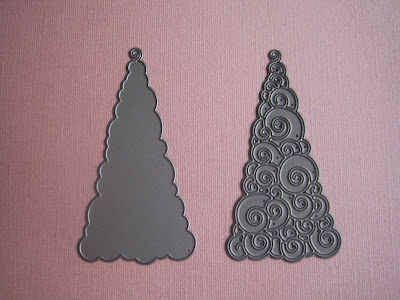 Here are the two dies together - with the solid one on the left. Now, although the solid die is a bit cheaper, it does almost double the cost of the original die - plus it's specifically for the 'Winterland' tree so can't be used to back other MB tree dies, clever move huh?! BUT, to be able to use a die I was shying away from I think it was worthwhile - imagine gold on green, gold on red - the list goes on.

Of course, you could trace around the outline of the swirly die and trim just inside the pencil lines if you have patience and a very steady hand - and you don't really need to include the swirly top bit at the very top of the tree on the backing.

So, that's the die cutting secret.

Then, Carol says she has the swirly tree die and it doesn't cut well. I might not have the solution but here are some thoughts anyhow. If the die truly isn't cutting through the card properly, leaving the die in place, run it through the machine again. You might have to move the die carefully across the cutting plate or perhaps add a shim of paper - one sheet at a time though 'cos you don't wanna overstress the die cutting machine. Taping the die in place to the card before you start can help to hold it firm. But, occasionally some dies, even from reputable companies, just aren't good cutters and it's worth checking back with the manufacturer or retailer. When you think how finely die cutting machines are calibrated I guess now and then there can be a bad apple or die in the barrel.

Another issue might be removing the cut out card from the die - and this die is a really tricky one - probably the trickiest one I have. Some people advocate candle wax rubbed onto the die or even a tumble dryer sheet rubbed over supposedly helps. I now swear by waxed paper between the die and the card - huh, although then you do have to carefully peel the waxed paper from the front of the beautifully and easily released die cut of course, most folk don't tell you that part! The swirls do take a bit of of poking out anyway, a pokey tool plus a teeny pair of scissors are what I use. The teeny scissors are because the swirls you want to release and discard can get tangled around the actual die cut image so careful snipping sometimes helps to release them from their determined cuddles!!

Another thing I learned the hard way - originally this card was going to be the pearlised white on the silver metallic backing card I used. Nope - not such a good idea. To adhere the swirly tree to a die cut or even plain background you need just little touches of glue/adhesive - I use a Quickie Glue pen here. And glue pens do not like shiny surfaces, they just won't stick, full stop :( Any thoughts of using the Xyron were also discarded - that machine does have limitations and this swirly die would mean far too many bits of excess adhesive to remove, and from metallic card you will actually get smears. Trust me, I've been down that road before. Hence the switch to the blue matt card background where it worked like a dream.

So do be aware that perhaps matt backgrounds and shiny swirly toppings are best for this tree die. Even adding double sided self-adhesive sheet before you cut would probably mean a nightmare when you try to remove all those excess pieces from the cut out die.

Pfffft, I bet you wish you hadn't asked now :)

Have a nice day - I hope I wake up feeling easier, getting fed up of being bent over looking at my feet for the first hour of the day!