'Tis the season to be jolly

fa-la-la-la-la-la-la-la-la- laaaaaaaaaaaa :) Aw, come on, join in. And despite many folk resisting, there aren't too many days until the big fat man in the red suit arrives. And maybe I ought to just whisper this, I just reached my target of 100 cards made for Christmas! As there are lots of challenges right now with the theme of Christmas, plus I do have loads of quite a few Snippets prizes connected with Christmas too - I'll just keep making 'em anyhow.

This card really does remind me 'decking the halls with boughs of holly'. I took a peek in the garden earlier and our quite young variegated holly bushes sort of cowered - they're still babies though so are safe this year. 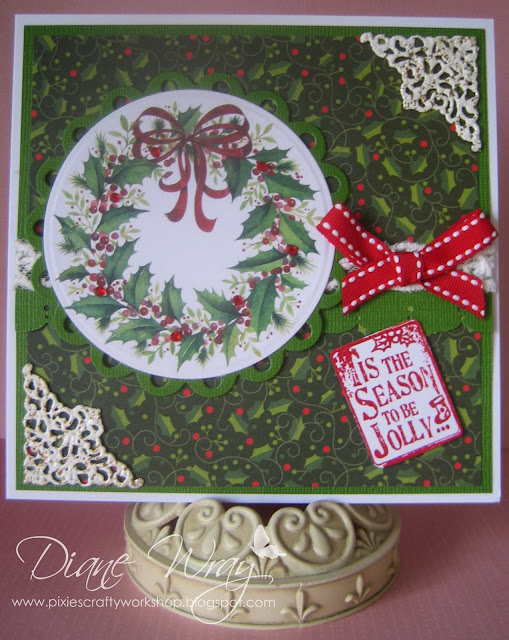 - the image is from LOTV's pre-coloured Art Pad, called 'Festive Foliage' - bought on Sunday at the NEC, die cut with a round Nestie and then layered onto a scalloped round Nestie which was cut from green Core'dinations card

- the patterned backing paper is also LOTV, from their 'Classic Christmas' pad - popped onto more of the same plain green Core-dinations card

- added a 'belly band' which was punched from a snippet of the green card using Martha Stewart's 'Traditional Scallop' punch, topped with a strip of lace and then a red 'saddle stitched edge' bow added

- the sentiment is LOTV too, from their 'Christmas Grungy Messsages' set - stamped using SU's 'Real Red' then just rimmed and popped onto the card with sticky pads

- the corners started out life as gold ones, I 'frantaged' up a few a little while ago - here's a link to how I did them

Now, here's a little tip girls. To stick down the bow I would usually use ultra strong adhesive tape or perhaps the glue gun - but I knew I already had to work out how to stick the metal corners firmly as well, without glue clogging up the holes in the filigree and showing through. I picked up this idea from here on Bev Rochester's blog ages ago but this is the first time I've used Crafter's Pick Incredibly Tacky Glue: 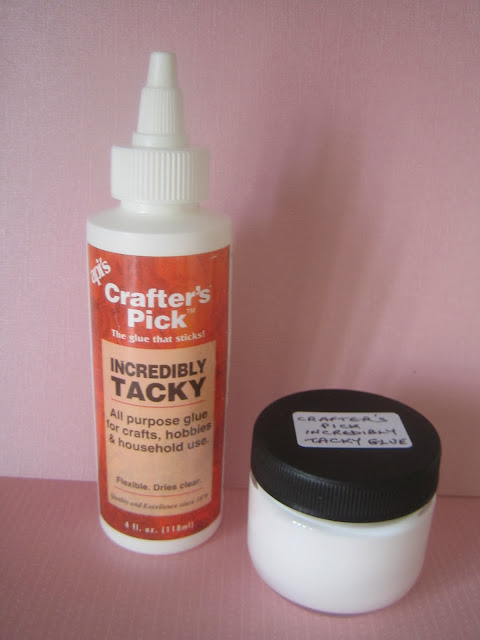 It's white, not too runny like some clear strong glues but it dries clear, and truly is incredibly strong. To make life easier I did what Bev does and decanted some into a clean smallish glass jar - I think some sparkly stuff was the original occupant. Then you don't have issues with the top of the bottle clogging or even worse deciding it won't open at all - and you just pick up what you need on the end of a cocktail stick or an old pokey tool. It's great stuff and I'm very impressed with the results - it's made in the USA but can also be bought online in the UK from EBay and good craft suppliers (I got this ages ago and only just used it for the first time - shame on me).

BTW, I'm not on commission :) Chance would be a fine thing.