I really should have posted this recipe in time for Halloween: 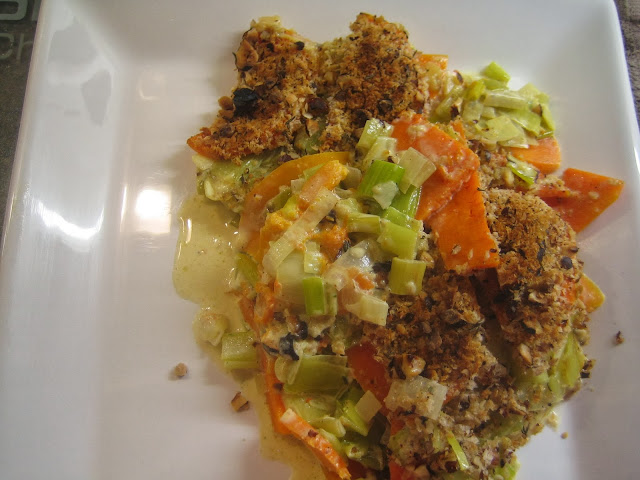 Serves four - not on your Nellie, more like two!


Heat the oven to 220°C/200°C fan/Gas 7. Heat the oil in a pan and cook the leeks, garlic and 4 of the thyme sprigs for 15 minutes, stirring occasionally, until softened.

Place a layer of squash in the bottom of each of four individual ovenproof dishes, top with a few of the cooked leeks and season. Repeat the layers until you’ve used up all the mixture.

Mix together the cream and stock and divide this between the four dishes. Top with the hazelnuts, breadcrumbs and remaining thyme leaves.

Things I do: Or rather should have done :( The recipe implies that you pop whole thyme sprigs into the leeks and garlic at the start of the recipe. I did that and then realised that whole sprigs would be rather chewy so I removed them before layering the dish up - and I used one shallow dish rather than separate ones. To my mind removing the thyme made the end result a bit bland so in future I'll strip the leaves from the stalks for the whole of the recipe. I served this with seeded rolls but the two-legged mouse and I agree that it would go really well with bacon or a grilled pork chop.

Having said all that, it is one I'll try again!