I recently made a few thank you cards and this was the first one: 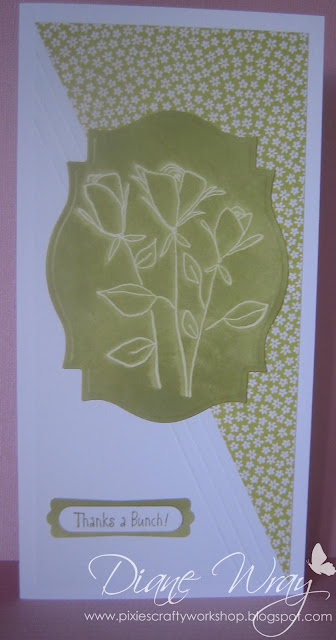 - Penny Black 'Love Blush' stamp, stamped with VersaMark onto Clarity coated/silk card and allowed to dry. Then it was rubbed over with Tim Holtz 'Peeled Paint' using a 'sponge applicator thingy with a wooden handle' before being polished off with a piece of kitchen roll. NB. I didn't use embossing powder and heat set it, although that is an optional step extra of course, it was purely stamped with VersaMark and allowed to dry properly before going any further

- a piece of green patterned card (a QCME magazine freebie by Pink Petticoat) was trimmed to fit diagonally down an oblong snippet of white card and stuck down before I added three embossed lines. Little trick, which is probably obvious, don't do the initial emboss from the back of the piece of card - do it from the front first so you can see the line of the patterned paper you want to follow, then flip the card over and run down the lines again from the back

Did the supermarket run today and got 'Miss Supermarket Personality of the Year' working on the checkout I unfortunately picked. One of those who totally delights in throwing stuff through ten times faster than you can cope just for the sheer fun of it. Wish you'd seen me juggling with one packet of linguine and another one of spaghetti like a circus clown - oh, and also just add three escaped apples into the mix, five items in one performance. Sigh - am applying to the 'X-Factor Talent Show' as there are skills I didn't know I had just waiting to be exploited :(