A little while ago I blogged about making an Acceptance card to a Golden Wedding celebration back here. The big event was on Saturday just gone and this is the card I made: 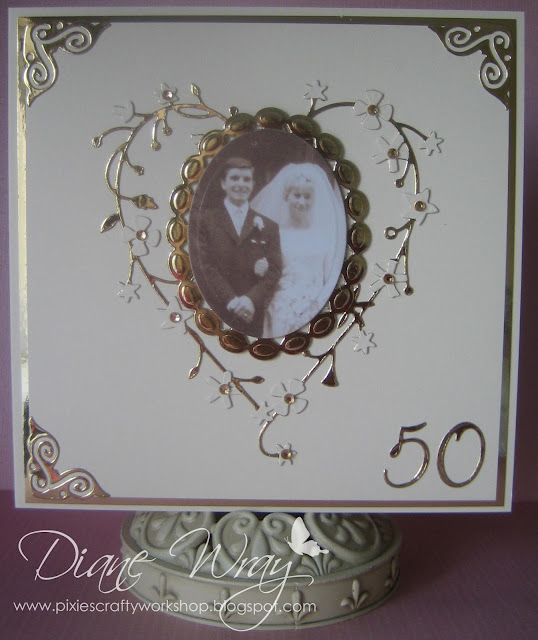 Having said I really didn't (probably ever) want to tackle another card based around a photo, Len then came up with a black and white Wedding photo of the happy couple - sigh. But, it was going to be unique I guess, so off I went to incorporate it into a card - not an easy task as it was one of those group photos with relatives all huddled together on either side of the bride and groom. I scanned the photo, applied sepia effect then resized it umpteen times so I could use a die to cut just the couple out of the photo. Not only that, the matt photo paper I was using was a devil to work with - one tiny blemish of sticky and that was it, no way could it be removed even using my sticky stuff eraser - it took four attempts to get a perfect result. You can imagine the air was just a tad blue here!

- gold mirri card for the next layer, topped with another square of cream card stock

- the heart was cut using Memory Box's 'Bingham Heart' die - a lovely gift from ScrappyMo when she was over here. I die cut it first using gold mirri card and then a second time using cream card stock - in a moment of total madness. The little flowers and stars were then snipped one by one from the cream die cut and popped onto the matching flowers etc on the gold die cut - and a few little gold coloured gems were added. By which time my eyes were crossed and my head was thumping from concentrating :(

- my in-house critic agreed that the other three corners looked a bit bare so I added corners, die cut from gold mirri card using a 'Whimsy Corner Die Set'

And then, the same in-house critic said that a hand made envelope would be a nice touch - as he dodged a flying paper trimmer: 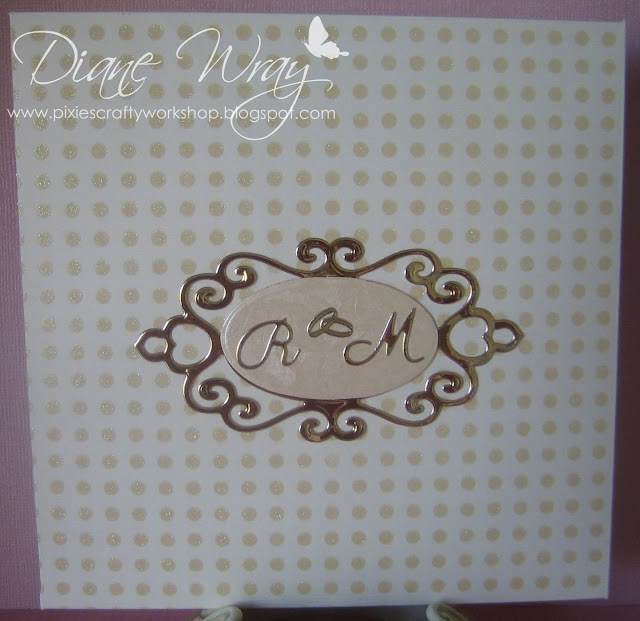 - 12" x 12" sheet of card from DCWV's 'Preppy Princess' paper stack, made into an envelope using with my trusty Crafter's Companion Enveloper board

- but, none of my dies came with an ampersand  - sigh - so I just added a teeny little 'wedding rings' peel off :)

And the verdict was - they absolutely loved it! Yay, so worth all those hours of work.

This is for the current challenge over at Cuttlebug Mania, which is to use dies, anything goes. I just squeaked in at the very last minute too! There are some fabulous entries already so I'm certainly not holding my breath here.