Less is More, use felt or fabric

What?! I almost had palpitations when I saw this week's challenge over at Less is More, to use felt or fabric :(

And then I remembered that I did have some felt after all, in one of the Christmas goodies boxes. 'Sho nuff', I found some ordinary red felt with silver sparkle in it and also some self adhesive green felt. Red, green, green, red - it took just a few minutes to work out the limitations and way forward: 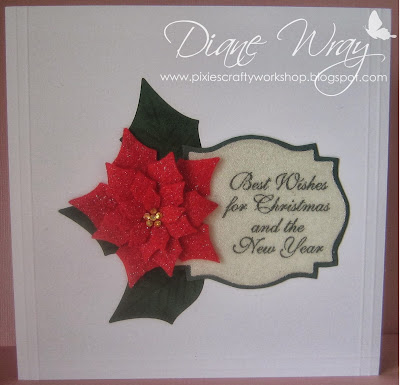 - Spellbinders Poinsettia die set to cut and layer the red felt part of the poinsettia, topped off with little gold gems. Then three leaves die cut from the green self adhesive felt - I love the way the veins really show up so well where they've indented the felt

- sentiment was stamped onto pure white card using Funstamps 'Best Wishes Message' stamp and Memento 'Northern Pine' ink pad. It was then covered with Woodware Ultra Sticky sheet and die cut using Nesties Labels Eighteen die, then the top part of the sticky was revealed before the whole thing was dunked into clear teeny tiny micro beads. Yeah right, I gawped at the way the beads had dulled the white down to almost cream - but plodded on by mounting the sentiment onto a snippet of green, cut using the same die as a template

My 'in-house' critic likes it muchly ('very tactile' were his words) and doesn't think the 'off white' sentiment looks at all odd. Ha, I reckon that's 'cos I was getting ready to bake a cake when he saw it!