Skipping WOYWW once again :( Keeping up with other things, like housework (sob), is my priority right now.

The current challenge over at Winter Wonderland is 'Twinkle, Twinkle, Christmas Star': 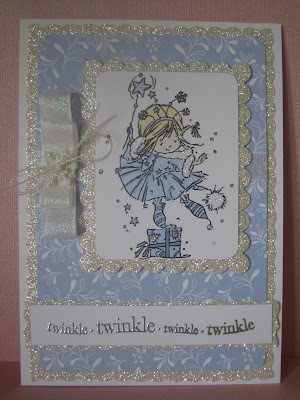 - Nellie Snellon image called 'Hokey-pokey', (I always thought it was the Hokey-cokey?) stamped in Memento 'Tuxedo Black', coloured with Pro Markers and tickled with Glamour Dust here and there

- SU glittery silver card, scallop die cut for behind the image and cut with the 'scallop' blade on my rather wonky-doodle (as opposed to hokey-pokey) Woodware trimmer for behind the patterned card and sentiment

- Kanban's 'Merry Mistletoe' patterned card - I love the soft blue of this card for a change (by the way, FoilPlay have quite a bit of Kanban stuff in stock)

- sentiment is by Hero Arts called 'Twinkle Border', bought for a 'snip' and then bravely embossed with Stampendous 'Sterling Silver' without any mishaps. I thought the sentiment just right for the challenge and this image :)

- iridescent ribbon wrapped round the patterned card and topped with a 'looped bow thingy' then an iridescent sparkly snowflake button, threaded with doubled iridescent cord tied in a bow - that's a lorra iridescent :)

Partway through making this card I spotted that Christmas at Sweet Stampin' are asking for colours other than red or green - wahoo! And, it's a new month over at Crafty Hazelnut's Christmas Challenge Extra. Three challenges with one card, almost a record for me :) Off to bed, this is scheduled and will link to the challenges when my Prince kisses me 'Good Morning my darling Princess'..........I might be some time waiting though :(

Edit: And Hazel said I can enter this into her current challenge over at Crafty Hazelnut's Christmas Challenge - the theme is a Christmas Carol or song - I had wondered because although it's a song I wasn't sure if Twinkle, Twinkle Little Star qualified 'cos it's not strictly Christmas based but now that Miss Hazel has said it's fine here I go :)