Gilding flakes and an apology

Apology first - to those who were, ahem, misinformed about Poliflora and the shortage affecting sticky products on my post of yesterday - which was of course April Fools Day. I washed my mouth out with soap then went and stood on the naughty step for a couple of minutes hours. But, thank you for taking it in good part :) And here's how justice comes back and bites you - the Crafters Companion sticky tape runner I was using whilst making today's card only went and broke on me - wasting half the contents. That'll larn me!

OK, gilding flakes - I've had a couple of pots of these for absolutely ages, over 18 months now. Frankly, I opened one pot when I got them, took a quick peek and before I could close the pot they were jumping everywhere - so that idea got put on the back burner.

But, I've been watching a Barbara Gray DVD and yesterday felt compelled to have a try. I'd forgotten that Elizabeth used this technique way back in 2011 - plus by coincidence Maggie used gilding flakes the other day. There was a great tip from Maggie as well - rub a little bit of talcum powder into your hands before working with the flakes! And the very first thing to do is to empty the pot into a much larger container before even starting to play I found :)

This is the result of my first attempt - even though the photo makes it look a bit like a barrel :) 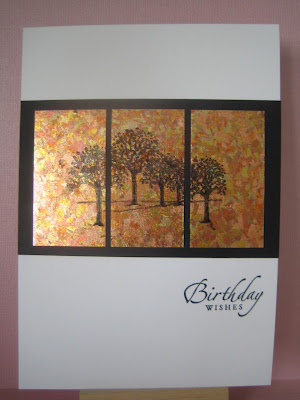 - image was stamped using black StaZon ink onto a piece of double sided adhesive sheet. I think, by its very nature, stamping onto sticky sheet doesn't give as crisp an outline as card - but, hey, I was playing, OK? The stamp is a Hobby Art stamp, called 'Tree Scene'

- then, the stamped image was covered with a piece of acetate - over the already exposed sticky

- the backing was peeled off the self adhesive sheet on the reverse side of the image, and then the fun really began

- I covered all that sticky sheet behind the image with 'Variegated Red' gilding flakes,  by Crafty Notions (in truth they're gorgeous shades of gold and copper) and rubbed 'em in first wiv me finger and then with an Indigo Blue scoochy sponge

- next, the flakes were covered with more sticky sheet and stuck onto card then trimmed to size and sliced into three before being mounted onto black card (and that's the point at which my glue runner jumped up and bit me in the b*m for being a bad girl earlier in the day)

And wahoo - I'm just in time for this week's male card 'Seize the Birthday' challenge, following this sketch: 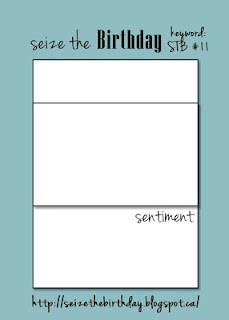 Hope you all had a lovely Easter break, and also that I'm forgiven.