I adore robins, they're perky, bright little birds - but the dark side is that they will fight to the death over territory. These two seem happy together though: 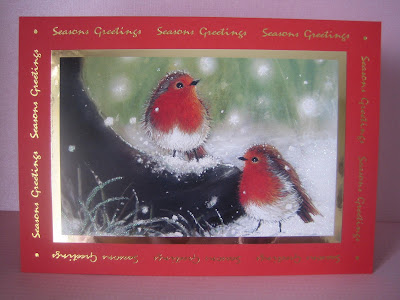 - 5" x 7" red card stock, already embossed in gold round the edge with 'Seasons Greetings' (bought from Craft Creations centuries ago) and chosen as I didn't want to spoil the image with a sentiment

- an upcycled Christmas card from 2012, just cut down to suit

All done, and I used one of my purchases from Ally Pally, a new XCut guillotine. Got it from Crafty Devils and am super-delighted with it :) OK, so the Woodware trimmer has been spared as the interchangeable blades are great for fancy edges - but I could weep at waiting so long before buying a decent guillotine for such straight edges with no wobbles or slight curves! I put off for so long as I feared for my fingers if the truth be known :(

Oh, and earlier today Len spotted the photo of the Playground outing on yesterday's snippets post. His comment? 'Crumbs, looks like the St. Trinian's Mob on an outing'. I grabbed me lacrosse stick and chased him round the garden three times threatening exactly where it would end up what could happen if I caught him - man, he can really run too!! :)

I suspect I might have two entries this week for 'Wonderful Wings' as am likely to be stuck in the craft room most of today while the leak is sorted out in the kitchen. Sigh, unless I bring the ironing board up here - am not suggesting that one, me not totally stupid!