Strut your stuff boy - it's your Birthday!

The current challenge over at Seize the Birthday is to make a card for a male following their current sketch. As I almost lost the will to live following the same sketch for a girlie card, I'd thought about skipping this one. However, that's what challenges are all about - pushing the boundaries innit? 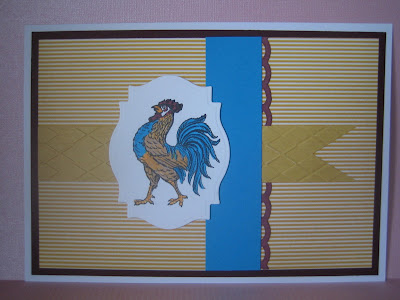 This is the sketch, which I bravely turned on its side - brave 'cos I've only done a handful of sketch based cards:) 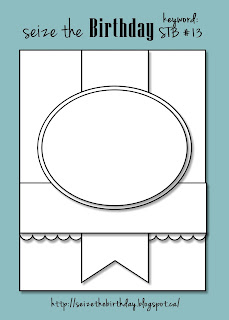 By a stroke of luck, whilst tidying up a few things here, I found a ready stamped image which I'd been sent by a lovely bloggy friend and away I went!

- pre-stamped and already die cut image, which I coloured with Pro Markers. I don't know who the image is by and can't say who sent it (for fear of the copyright police) - but I know, and they know, who they are - thank you!

- the 'banner' was made using paper from the 'Sunshine' pad again, this time picking a matching plain reverse and embossing it using a brilliant folder that another friend, Mary H, sent me a while back - it's by Darice and is called 'Argyle', perfect for both male and female cards as well as great for snipping the ends into points by following the embossed pattern

Slowly am beginning to really find sketches such fun to play with - wahoo!