A busy day here yesterday, need to do some serious blog hopping today to play catch up - especially as quite a few of you have been playing in the Playground already! I'll be there ASAP.

I went to my box of saved shop bought cards which were sent to us last year and made this: 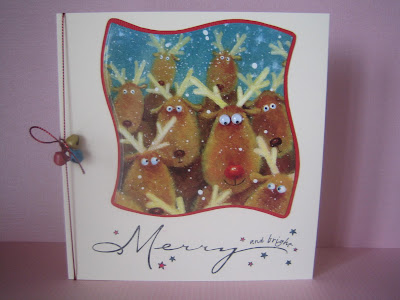 Think I need to get out a bit more 'cos I sat here 'home alone' chortling to myself whilst making this. Santa would be lost without his helpers although this lot look like they've been at the sherry bottle and then all piled into one of those photo booths - hic :)

- image from a Christmas card, upcycled by die cutting with a 'wonky square' Nesties die and then mounted onto red backing card from the snippets folder, hand cut after drawing round the outside edge of the same die

- sentiment is by Hero Arts, called 'Merry and Bright', it's a pre-loved one I recently got from Sarn. Stamped with Memento 'Tuxedo Black' and the little stars were coloured with Whispers pens. Those pens have really fine nibs at one end and are great for speed if you don't want to clip Ultra Fine nibs onto Pro Markers, plus they don't 'bleed' through card stock

- the little bells are from the elasticated bracelet I bought in Estepona in November and just snipped apart, they're tied on with red fine cord

- and the final touch, which set me off giggling even more - 'googly eyes' on Rudolph :)

A happy card for a child, or an adult who never grew up!