Sarn's post of yesterday reminded me that I too needed to make a little batch of notelets, to enclose with Snippets Playground prizes. So, out came the snippets folder: 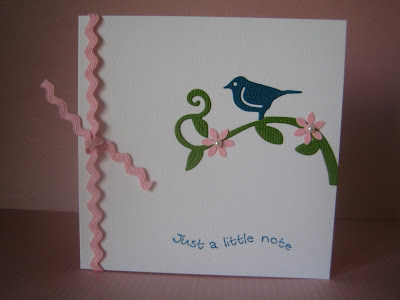 And just to prove I made four the same: 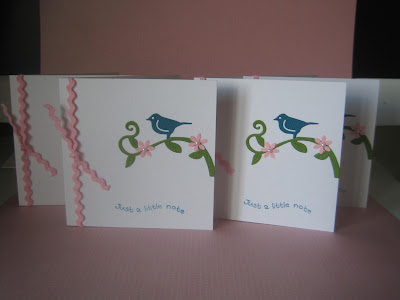 The light here was very 'iffy' - you can see that the blue birdie isn't anywhere as dark as the top photo implies, in fact it was an almost perfect match for the SU 'Pacific Point' ink pad I used - despite being cut from Core'dinations card.

- Cheery Lynn 'Bird on a Branch 2 - A168' die plus blue and green Core'dinations snippets. To my shame I've had the die for months now and this is the first time I've thought to use it, bad girl, although I did think about 'grounding' the branch on the edge of the card at least

- sentiment is an Elzybells one (sadly discontinued when they closed down), stamped using SU's 'Pacific Point'

Am skipping WOYWW this week - need to go and collect those flipping school newsletters from the printers and get down to some serious 'envelope stuffing' :(

Then comes the 'fun' part - our local post offices are either closed down or quite a walk from the car. 600 newsletters adds up to about three mahoosive sackfuls and Superwoman ain't my middle name - so I cheat by splitting the loads into much smaller lots and packing them into heavy duty cotton shopping bags, bought just for the purpose. And then (ssshhh) sneaky me drives round North Hampshire posting as many as possible at a time into the biggest red post boxes available...........usually under cover of darkness or in Summer, when the evenings are so much lighter, wearing huge sunglasses and a big floppy hat :)