I could bore you to death with photos of piles of wedding invitations, that were hurriedly cleared from the desk late yesterday so I could have half an hour of play time. But, instead I'll just bore you with a peek at the storage for dies that I've been sorting out in little breaks between making invitations :) 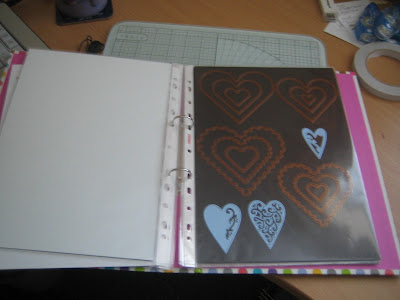 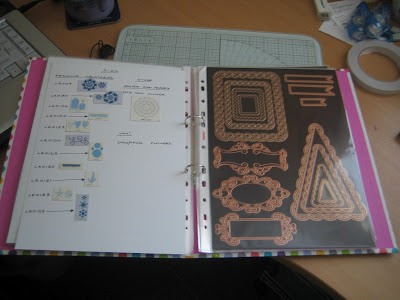 I find the organisation of crafting goodies almost as much fun as using them - and, unlike a lot of lucky people, have very little free wall space here so don't have the luxury of suspending things from hooks, shelves and magnetic knife racks :(

This is the next best thing though, instead of rattling through CD cases and packets I just flip through a file now - the A4 magnetic sheets came from First4Magnets and I already had a spare file and heavy duty plastic pockets. Of course TH and other thick dies are still in the RU Box :)

The index page to the left is just to remind me of the names of the smaller dies that were still in packets, I just snipped the relevant bit from the back of the packet before storing the dies in the folder. One packet of flower dies is too sticky to snip so I'll just die cut the three little flowers before adding them to this sheet, sticking it into a poly pocket and popping it in the front of the file.

To be much more entertained, do hop over to Julia's here where you can see what she's currently up to, along with loads of other WOYWW-ers as well :)

As a few of you know, last week was not good here and I did struggle to visit everyone who left lovely comments. Apologies for that, and I'll be hopping round as normal this week.

Have a great day! Me? In between blog hopping I'll still be working on those invitations :( Come and help if you like!