A Tuesday Tale - Eddie the Eagle

Not sure if anyone remembers Eddie the Eagle? He was a British 'ski jumper' who made it to the 1988 Winter Olympics with no funding, not a lot of talent, thick glasses which he had to wear when jumping and the heart of a lion. He became a legend in his own time - and famously managed to come last in the events that he entered. A true British eccentric who endeared himself to many people. 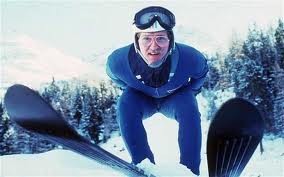 But, a few years later, Eddie had competition in deepest Hampshire, from Robin Cousins the Cossack Dancing Ice Skater no less :)

We hadn't lived here very long and one night I woke up to find the landing light glaring away. Not really awake, I hopped out of bed and switched it off then returned to our cosy 'nest', not even noticing that Len was missing.

Unknown to me, he was in the bathroom - also half asleep but attending to a quick call of nature. Oh dear, the next thing I heard was the bathroom door opening followed by a strangled shout and a lot of thumping right down the stairs :(

He'd opened the bathroom door, flicked the bathroom light off and been plunged into darkness. Completely forgetting the different layout of our house, he'd then taken a couple of steps straight ahead and in true 'Eddie the Eagle style' had promptly taken off into space. Yikes, I disappeared under the duvet pronto - and had to bite the pillow pretending to still be asleep when Len staggered into the bedroom muttering to himself 'Funny, I was sure I'd put the landing light on?'!

I only confessed to my part in this last week by the way :) Bless, he had the good grace to laugh - and thankfully he wasn't badly hurt, just shaken up with a very bruised rear end! I never did that trick again, and neither has he thankfully :)