This is a really yummy-licious soup, well worth the effort I promise! 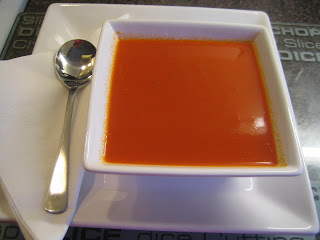 The most work goes into skinning the peppers and the chilli, but when I made it recently the two-legged mouse was back into the kitchen for 'seconds' like greased lightning so I think it just might have been a hit :)

Set the grill to medium. Put the peppers and chilli, skin-side up, with the onion, garlic and thyme on a sturdy baking tray. Mix in the oil and put the tray under the grill until the skin on the peppers blisters and browns, about 10-12 mins. Turn the onion wedges halfway through cooking. Cool for a few mins, then peel the skin off the peppers and chilli.The best way to do this is to put the grilled peppers and chili into a sturdy poly bag and twist or seal the top, leave for 10 minutes or even 15 minutes. This helps to soften the skin and makes peeling so easy. Don't be impatient as I was, the last ones from the bag that I peeled were so much easier to do so 15 minutes would be about right.

Tip the vegetables into a large pan, scraping in the juices as well. Add the can of tomatoes and the hot stock. Bring to the boil and simmer for 10 mins. Whizz with a stick blender (or use a liquidiser if you don't have a stick blender), then season. Pour into a jug and then into hot mugs or bowls.

Things I do: First of all, for anyone who doesn't like chillies, even though the roasting and skinning really mellows the chilli - just leave it out, the slight hint of chilli heat won't be there but the soup will be just as good. I couldn't find thyme (yet again) at the supermarket so I just added a little pinch of dried when everything was popped into the pan to be simmered.

This would be just fine as a 'starter' for four people, but would only serve two or possibly three of you as a supper dish. Fresh crusty bread is lovely with it of course :)