A Christmas card - let it snow

I have a stamp with the sentiment 'Let it snow! Make it stop!' on - and did think about using that originally, given the conditions in some parts of the UK this week! I hope that anyone affected is keeping warm and safe. 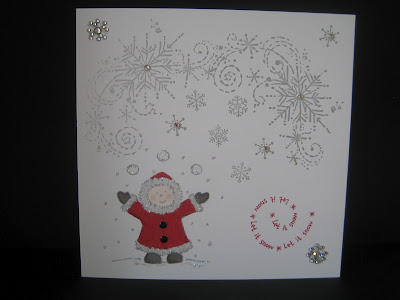 In the end I opted for the spiral sentiment just saying 'Let It Snow' echoed by the 'snowball juggling act' and the swirls elsewhere :)

Hazel, over at her Craftyhazelnuts Christmas Challenge , set the rules for this week's challenge as 'Use a greeting or sentiment'. So, I chose the wording stamp first and worked out what to do with the rest of the card round it.

- image by Elzybells, stamped then coloured with Pro Markers and glittered with Glamour Dust

- a couple of diamante snowflakes, plus some diamante gems

Once again I'll say, it's such a shame that Elzybells stopped trading, I only discovered them when they were having their massive closing down sale and wish I'd known about them sooner. Their sentiments stamps were really fun :(

I made a couple of these cards exactly the same while the stuff was out, so two more for the Christmas card box, yay!!

Friday Feast will follow ASAP - lost the recipe but woke up in the night remembering where it is :)