Len always knows I mean business when the big hessian bag holding all my house cleaning essentials is brought out. Not for me a bottle of white vinegar and some cotton wool as used by Anthea Turner in her 'Good Little Housewife' TV series, I have a huge assortment of bottles and sprays for every eventuality :) 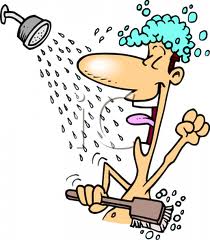 Years ago I found a new product in the supermarket, cleaning foam! Coo, that was swiftly bought and I couldn't wait to try it out. Cleaning the shower room that Saturday was fun, no more crawling round cleaning the shower tray for me and I got to liberally use said new-fangled foam spray.

The very next morning, Len innocently went to have a shower - leaving me reading a book in bed. I heard the shower being turned on and in he hopped - then World War III broke out. What a commotion! At one point I truly expected him to come flying through the wall into a wardrobe - crashing, banging.....and some very rude words as well.

The shower was abruptly turned off and he charged back into the bedroom, red-faced and just a little bit cross as well :( OK, very angry then!

I peered over my specs and innocently asked whatever had been going on.

The angry response was 'WHAT have you been using on the shower tray?'. Oh dear, then I remembered that I'd sprayed, watched all the foam bubble up then closed the shower door for it to do its work - and completely forgotten to rinse the residue away. Of course it had just dried and then been turned into a slippery mess when Len went for a shower :(

But, what he said next still rings in my ears - and I giggled about it for ages afterwards, bad girl.

'Do you realise - I've just done an impression of Robin Cousins , skating totally stark naked, whilst doing a Cossack Dance round the shower cubicle?!' Apparently a lot of the banging and crashing had been an attempt save himself as Len slid down the wall, still doing a Cossack Dance, and ended up in a heap in the merrily foaming shower tray.

Needless to say, I was banned from ever using that stuff again - and he still looks into the cleaning bag now and then just to check what mischief could be brewing in there!