My Mum (christened Margaret but always called Peggy) used to hate wash days on the odd occasions we lived in the UK when I was a child. For some reason when we lived back here she always fell into the old Monday washing, Tuesday ironing routine whereas overseas life was much more relaxed and flexible. So, Monday was not a good day over here if the weather was bad - I clearly remember anxiously praying for no precipitation (today's big word) rain on Mondays!

Another reason not to be thrilled about Mondays was the fact that, often for speed, it was generally cold meat from the Sunday joint with something like bubble and squeak or chips (shock, horror!). But, on a cold Winter's day there was nothing lovelier than getting in from school on a Monday to the smell of my Mum's version of Pan Haggerty.  As a 'Northern Lass' this went back to her roots, although most versions include cheese, so this was obviously my Mum's own spin on the dish which is why I've called it Peggy's Pan Haggerty :))

You need to think ahead and save a few slices of the leftover roast beef from the Sunday joint and any gravy - if you have any two-legged mice in the house then hide the beef behind things at the back of the fridge where they can't find it for midnight snacks!!

Left over roast beef - sliced (even just four slices can be halved and spread out a bit)
1 large onion, halved and thinly sliced
8 rashers unsmoked back bacon - chopped into bite sized pieces
3 large potatoes (baked potato size) - peeled and thinly sliced
1 pint hot gravy (this can be part leftover gravy made up to a pint using one or two Oxo cubes - or all Oxo)

In a deep casserole dish, layer half the onion, half the beef, half the bacon and half of the potatoes.

Repeat with another layer of onion, beef, bacon and potatoes.

Add the hot gravy/Oxo stock until the stock is just up to the level of the top layer of potatoes but not covering them.

Pop casserole dish into the oven for approx. 90 minutes. Check it's cooked by poking a pointed knife or skewer down into the lower level of potatoes - the top layer of potato should be crisp and browned. 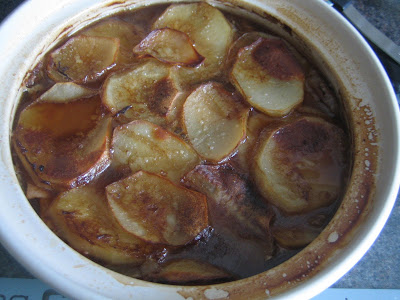 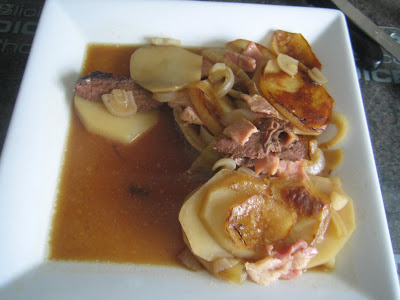 Sorry this is all a bit vague, it's one of those dishes you grow up with and sort of cook by instinct. It was only this Monday that I actually took note of quantities and cooking times as I went along! I think you can use corned beef in place of the cold roast beef but I don't recall Mum making this with anything other than cold roast beef.