I started making a batch of cards well in time for ScrappyMo's Rudolph Days Challenge - and then got sidetracked. If I just make the one card then I won't feel the urge to finish off the other nine in the batch - so that little project is on hold for now. Maybe by the end of July they'll be done ☺
But, I never miss joining in this fun monthly challenge and suddenly had the idea of looking through a box of received Christmas cards which I like to try and up cycle. And this is the result - very quick and easy, but at least I get to play along: 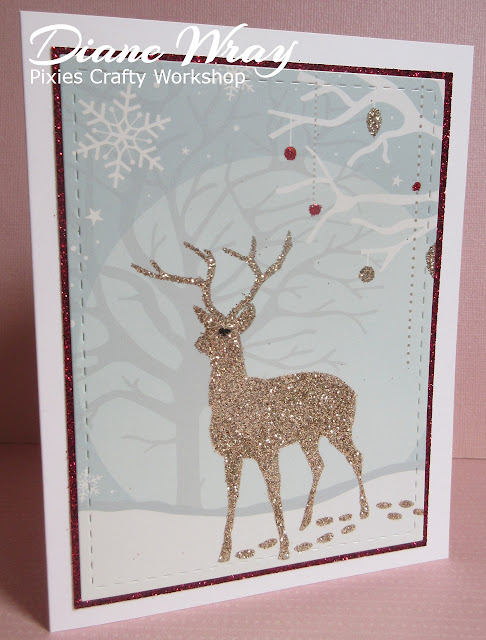 I used:
- an off white card blank, trimmed to 5.5" x 4.25"
- a shop bought Christmas card, from which I die cut the part of the woodland scene I wanted to use, with a Lil' Inkers 'Stitched Rectangles' die
- added a piece of X-Cut red self-adhesive glittery paper to a snippet of white card and trimmed it to just slightly bigger than the image panel
- glued the image panel to the red glitter panel and then glued it onto the card front
- the card had a couple of red dots printed on it, so twinkled those up with red Stickles, and added a third one to follow the 'rule of threes'
- and the deer didn't have an eye so I added one using black Stickles
- I always add Stickles using a really fine paint brush, kept just for the purpose. Less chance of overdoing it I find!
The reason I chose a red 'frame' is because all the sparkly gold card and paper I have wasn't the right shade - plus I knew I could twinkle up the red dots to pull it together. Who knew there could be so many variations of gold sparkly paper?!
In real life this card sparkles beautifully, but as is often the case, the camera doesn't want to pick that up as well as I'd like.